The large parks are part of the city from the early years of its establishment. As such, and in addition to its large open space in a democratic country, the parks hosted over the years (and are still hosting) many protests, demonstrations, gatherings and celebrations.
Among them were the celebration of America’s independence, anti-war protests, anti-slavery demonstrations, and the Women’s March.

The Boston Common and the Boston Public Garden

Around the park are several statues and memorials as the Soldiers and Sailors Monument, the Frog Pond, which turns into an ice rink during the wintertime, ball fields, public restrooms and sandwiches shop.
Other coffee shops and restaurants are located along the streets bordering the park: Charles and Tremont streets.

Among the fun annual events occurring in the park are the Annual Opera Series, Shakespeare on the Common, Lighting of the Christmas tree, fireworks on 4th of July and more. 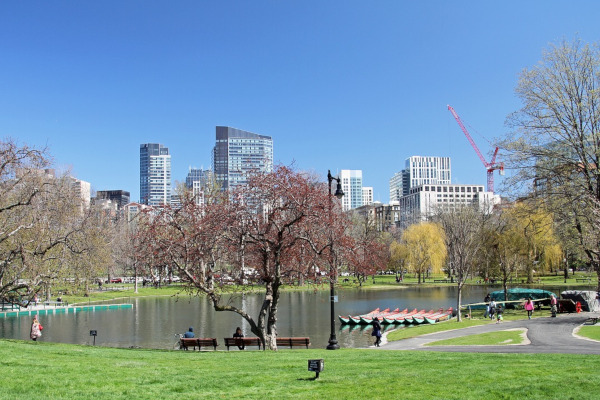 Located on the Charles River, overlooking the skyline of Cambridge. The park has wide walkways, beautiful trees, ball fields, public restrooms on the Storrow Lagoon, and performance stage, the Hatch Memorial.

Initially the Boston embankment was built in 1910 with the construction of Charles River Dam Bridge but during 1928-1936 it had a makeover due to the donation of the philanthropist Helen Osborne Storrow, and became the park as we see it today. Its temporary bandshell hosted concerts since 1929 till 1941, when the Hatch Memorial was completed.

Among the events hosted on the Esplanade are the summer concerts series, 4th of the July fireworks, fitness classes, and community events. 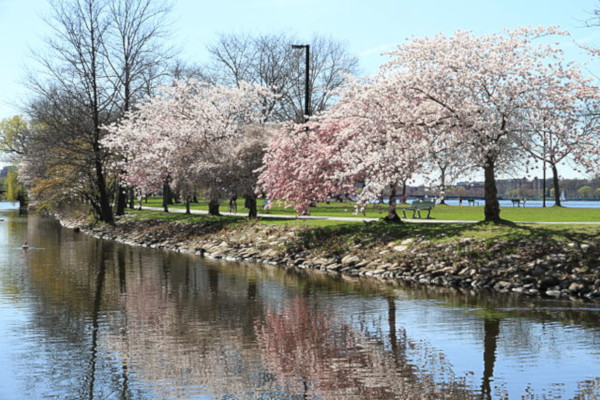 Opened to the pubic in 2008 after years of planning and construction of the underground highway.
The Rose Kennedy Green Parkway is a linear park connecting between several of Boston Neighborhoods.
It consists of pathways, landscaped gardens, promenades, plazas, fountains, public art, free wifi, and public restrooms.

It hosts more than 400 free public events a year among them are the Art Festival in July, Boston Local Food Festival in September, summer concerts, open markets and more.

The park is named after Rose Fitzgerald Kennedy, the matriarch of the Kennedy Family who was born in North End Neighborhood. Her father was Boston’s mayor, her husband was the US ambassador to UK, and out of her nine children, one was the US President and two were senators. 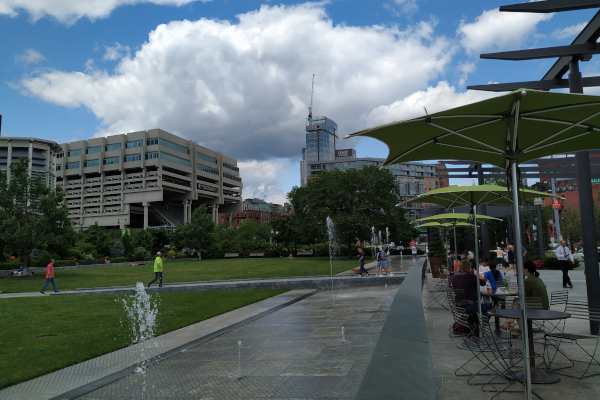 The Lawn on D

One of the newest and most unusual parks in the city.
Located in the South Boston neighborhood and considered as an all ages playground with cool collection of public seating and lounge chairs, interactive art exhibitions, assorted games such as bocce and ping-pong, and free wi-fi.
It hosts occasionally community events as concerts and fitness classes, and is sometimes closed for private events.
Check out the full event calendar here.

Locate in the south of Boston, Castle Island (not an island since 1928), offers a lovely park with restaurants, beach area, and tour options to Fort Independence, which provides harbor defense to Boston since 1634 making it the oldest fortified site in British North America.
In addition, it is a beautiful spot to view Boston Harbor. 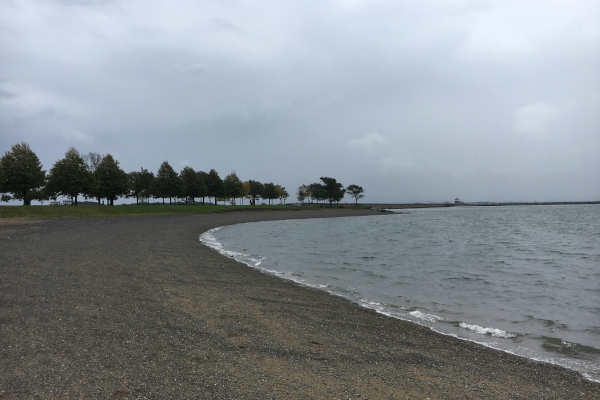