This itinerary combines visiting several of the locations on the Boston Freedom Trail and the North End neighborhood, known as the Little Italy of Boston with a focus on the women who lived in the area. This area is rich in history, and although cars drive on the narrow roads, the red brick houses are mostly the same as they were a long time ago.

The Freedom Trail, is a 2.5 miles path in downtown Boston, following 16 significant landmarks in American history.

The North End neighborhood was one of the first neighborhoods of the city. Many of the European immigrants lived here, among them were Irish, Jewish, and Italian. It is nicknamed “Little Italy” for the smell of fresh pizza coming from many Italian restaurants, bakeries, and stores, that offer Italian goods. The itinerary will focus on the main streets of the neighborhood – North, Hanover, and Salem streets. 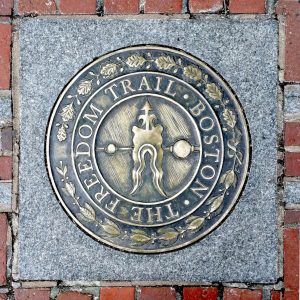 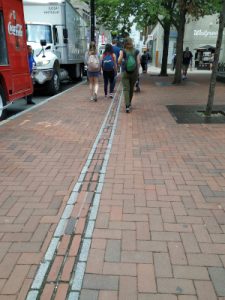 Recommended time: Since most of the itinerary is walking around Boston streets exploring the city, nice weather to walk outside is recommended. However, the first part of it, that follows the Freedom Trail includes visits in indoor locations, so in case of unpleasant weather, there is an option to focus on these places.

Duration: 2 miles. 4-6 hours if visiting inside the different museums.

Arriving at the starting point: The closest T station is State.

Guided Tours options: As always, we recommend to use the knowledge of the locals as well as supporting small business. Check out WWP list to find tours about women or organized by women who focus on the Freedom Trail and North End.

One of the oldest churches in the US, built in 1729 and served as a gathering place where people can freely express their ideas. The church hosted significant events which led to the American revolution, in particular, the organization of the Boston Tea Party. In 1877 it became a museum, an initiative of a group of women who saved the house from demolition.

The museum presents exhibitions about Old South Meeting House’s history and its role in the events that led to the American revolution, a 3-D model of colonial Boston and historical artifacts, such as John Hancock’s portable writing desk and the first edition book of the enslaved poet Phillis Wheatley. Special events as lectures, concerts, and guided tours are held throughout the year. 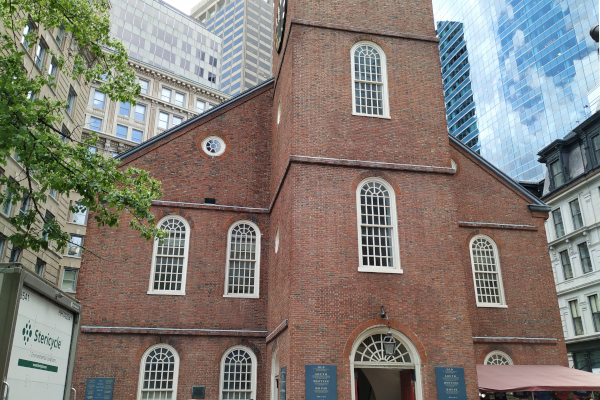 A park commemorating the great potato famine that accrued in Ireland during the 19th century caused massive starvation and led millions of Irish to immigrate to the US. At the park there are two groups of statues – one presents the story of a family who stayed in Ireland and suffered from starvation, and the other presents a family who immigrated to America and found prosperity. The memorial was dedicated in 1998 and was designed by Robert Shure. This park hosted several demonstrations in support of illegal immigrants. 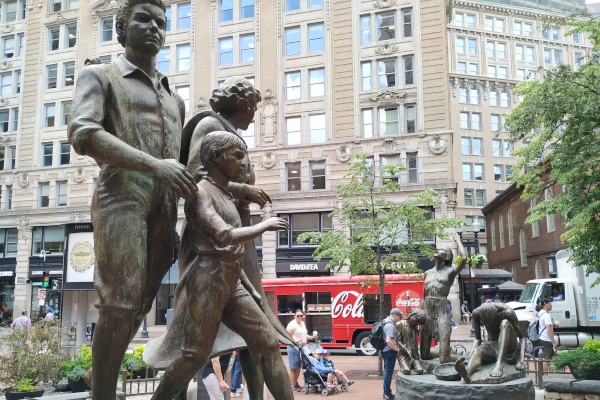 The oldest commercial building and a Bostonian landmark which was the home of the religious reformer Anne Hutchinson in the 1600s.

Later on, the building housed the ‘Ticknor and Fields’ publishing company, who published some of the 19th century’s greatest novels, including ‘Little Women’, ‘The Scarlet Letter’ and ‘Uncle Tom’s Cabin’.

A small plaque on the side of the building confirms its story.

The oldest public building in Boston, built in 1713. A lot of history took place in this building, it served as the Massachusetts Supreme Judicial Court, housed the Council Chamber of the Royal Governor and from the east side balcony of the building, the Declaration of Independence was proclaimed.
After the American Revolution, the Massachusetts state government operated from this building, and in the mid 19th century it served as the City Hall.

Today, the building serves as a museum, displaying artifacts and artwork that tells the stories of Boston as they occurred from this building.
Guided tours are offered daily, and occasional events are held. Click here for more information.

In front of the Old State House, there’s a mark commemorating the site of the 1770 Boston Massacre, in which British soldiers that were harassed by a mob, shot into the crowd, killing three people and seriously wounded others. 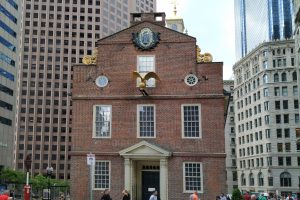 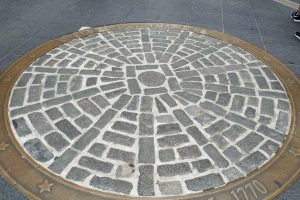 This historic marketplace is still a vibrant and as a gathering point since it was established in the mid-18th century. Many events occurred in this place, including the protest against the sugar act and the conventions that led to the American revolution.
For that reason, the place is sometimes referred to as the ‘Cradle of Liberty’.

Faneuil Hall has a great significance to women activism movements, the Boston’s great women’s fairs were held here as well as the New England Woman’s Tea Party, the Anti-Slavery Bazaars that were sponsored by the Female Anti-Slavery Societies, and the Women’s Trade Union League that was established here.

Throughout the years, some of the most famous and influential orators made speeches at this site, among them were Samuel Adams, Bill Clinton, and Susan B. Anthony.
Today, in addition to the food market, there’re shops, special events, and street performances. Click here for more information.

Standing outside of Faneuil Hall is a bronze statue of Samuel Adams, one of the Founding Fathers of the US, made by Anne Whitney – a poet and a sculptress.
The statue, erected in 1880, depicts Adams standing firm against the British rule.

The statue is facing the Boston City Hall. Notice that there never was a female mayor in Boston (since 1822). Click to read more about women in politics in Massachusetts State. 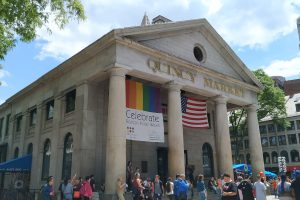 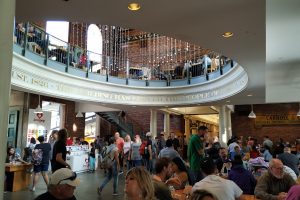 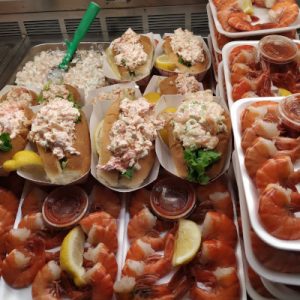 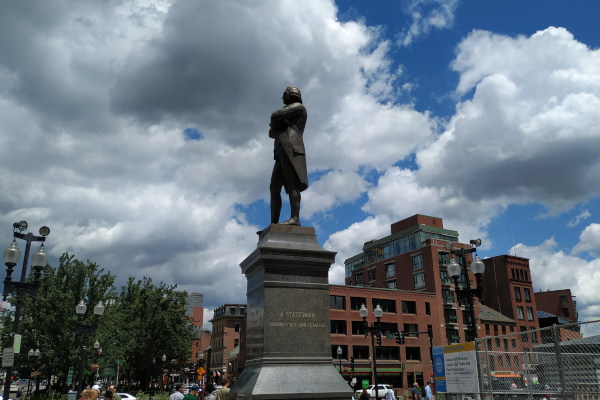 A memorial commemorating the horrors of the Holocaust and one of humanity’s great tragedies.

The memorial, erected in 1995, consists of 6 glass towers, each one represents a major extermination camp as well as six million Jewish people who were murdered under the Nazi regime.
It honors the eleven million people who died because of their race, religion, physical disability or sexual preference, as well as those who courageously aided death camp survivors.

The memorial was founded by the community with the involvement of many women from Boston, some were Holocaust survivors. 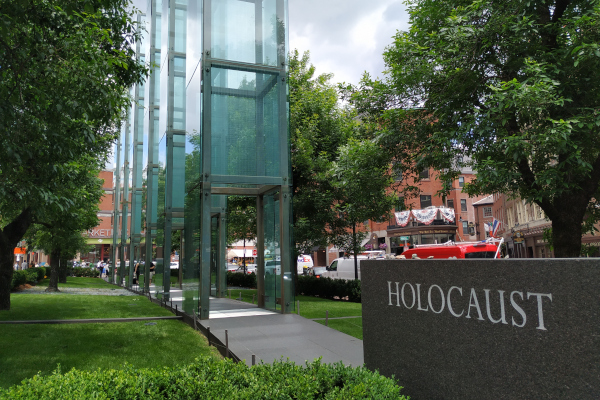 A linear park named after Rose Fitzgerald Kennedy – a socialite, philanthropist and the matriarch of the Kennedy family who was born in Boston’s North End.

On the side of the building there used to be a plaque commemorating Goodwife Ann Glover, the last person in Boston to be hung for witchcraft, 10 years before the Salem witch trials occurred. In 1988 Boston dedicated November 16th as Goody Glover Day.

This apartment building hosted the Paul Revere Pottery and Library Clubhouse between 1908 and 1915. Founded by the philanthropist Helen Osborne Storrow and operated by the artist Edith Brown and the librarian Edith Guerrier. As a subgroup of the ‘Saturday Evening Girls’, the library enabled them to form a reading club for young women, and the craft of pottery employed the local Jewish and Italian women. The artifacts they made gained both national and international recognition. In 1915, the Pottery moved to Nottingham Hill in Brighton till closed in 1942.

Named after Rachel Revere, the second wife of the Paul Revere – an active patriot during the American Revolution. While her husband wasn’t allowed to return to Boston, Rachel took care of their eleven children and operated the family business until the British left Boston. The letters she wrote to her husband saved in the Massachusetts Historical Society and describe her life during the American Revolution time. 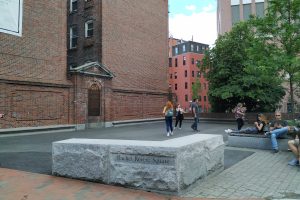 One of Boston’s most recognized landmarks. The bronze sculpture commemorating Paul Revere, an American patriot of the Revolutionary War, in his famous Midnight Ride, galloping toward the Old North Church to warn the troops that the British are coming. The statue was unveiled in 1940 after 16 years it took to create it and 40 years till it was placed in its current location. 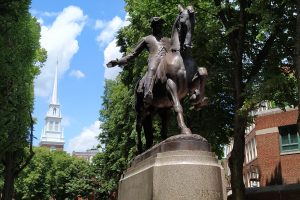 Another stop in the Freedom Trail is the Old North Church, also known as Christ Church. Built in 1723, the church is the oldest standing church building in Boston as well as the place where the American Revolution was launched. After receiving the message from Paul Revere, Robert Newman, and Captain John Pulling, Jr climbed to the steeple and hanged the two lanterns that signaled that the British are coming – “One if by land, two if by sea”.

In addition to Sunday services, the church visit include a talk about its history, visit the colonial chocolate shop, a crypt and a memorial to the soldiers who died in Iraq and Afghanistan. 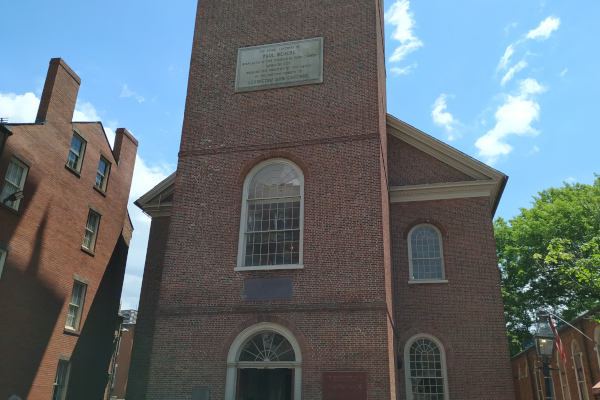 In this current apartment building, the Hebrew Industrial School for girls was operated from 1889 till 1920. Founded by Lina Hecht, a Jewish philanthropist, with the help of Golde Bamber, a Jewish Sunday school teacher. At first, the school was opened only for girls, where they learned history, religion, government, literature, and music as well as sewing, printing, millinery, and cooking, enabling the Eastern European Jewish immigrants’ girls to adjust to their new life in America and to learn useful skills. In 1920, the program was opened to boys and girls from other ethnic groups, and the school moved to a new location in Bowdoin Street in the West End.

If you are interested in exploring deeper and learning more about women who lived and made a mark on North End, check out the detailed self-guided tour prepared by the Boston Women’s Heritage Trail.

If you wish to continue following the Freedom Trail, it continues in Charleston neighborhood where you can visit the last two stops- USS Constitution and Bunker Hill Monument.

Otherwise, finish the day with a treat from one of the Italian bakeries or restaurants on Salem St or walk 20 minutes back to Boston Common to the beginning of the itinerary.