“Woman must have a purse of her own” wrote in her diary Susan B. Anthony in 1853. At the time of writing those words, married women were not allowed to own properties or assets, and the famous suffrage leader reflected on this discrimination as a barrier to women’s liberation.

Almost a century later, across the Atlantic ocean, a similar sentiment was expressed by English novelist Virginia Woolf in her 1929 book “A Room of One’s Own”. The book was based on a lecture Woolf presented to students at Newnham and Girton women’s Colleges of Cambridge University. In the very beginning of the literature-themed talk on “Women and Fiction”, Woolf decided to turn the focus into finances and their importance: “a woman must have money and a room of her own if she is to write fiction”. She then spoke (and later, wrote) on the importance of financial independence and to have the right space and material conditions for women to be intellectually free, and as a result – successful in their work and creation.

These days, women have their own bank accounts, “A Room of One’s Own” became a best-seller and coined a popular term and an iconic metaphor, and Susan B.Anthony’s house-turned-museum in Rochester, New York, sells a limited edition of purses with her quote for $250. The progress of financial freedom for women is now making way to new questions regarding their role in designing and managing the system that rules their purses, in a capitalistic society in particular. 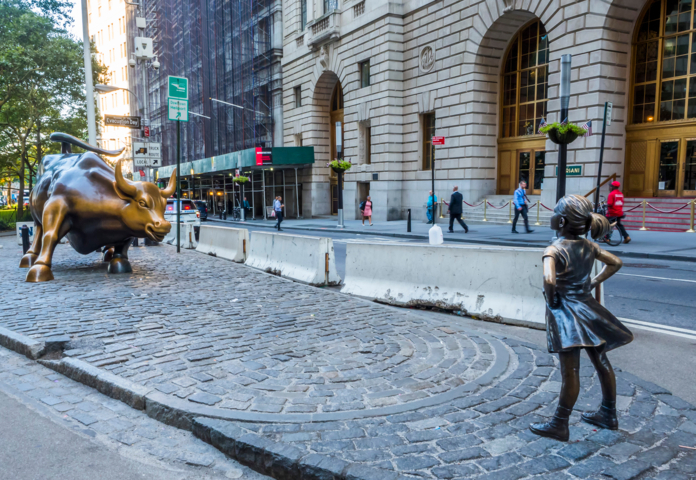 One Girl as a Symbol of Inequality on Wall Street

Fast forward to 2017, a life-size statue of a little girl in a short dress standing upright is installed in the most symbolic money-related space in the US – the Financial District, Lower Manhattan, New York City. This famous location is home to the New York Stock Exchange (NYSE) and the NASDAQ – the two largest stock exchange centers in the world, by market capitalization. Created by artist Kristen Visbal, “Fearless Girl” public sculpture was initially standing in front of the Charging Bull sculpture – a juxtaposition that serves as a testimony of gender inequality in the financial world.

What the artist captured without words, can be found in numbers in many reports and the public imagination. It is estimated that the financial institutions and firms based around Wall Street employ over 200,000 professionals. Among those, women hold less than 20% of the board seats and executive officer positions. Once inside, they are also subjected to a pay gap: making 30% less than the men doing the same job.

The male dominance of Wall Street is also described and perpetuated in fictional representations, such as popular films and TV series. The financial world as a boys’ club with a performance of masculinity can be found in Hollywood blockbusters such as “The Wolf of Wall Street”. Women enter the arena just to ring the bell, like “Sex and the City” heroine Carrie Bradshaw, who was quoted for saying “I like my money right where I can see it — hanging in my closet”. This results in about half of US women who admit that they don’t have a financial role model (those who do choose Oprah). 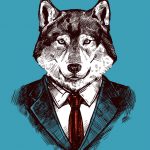 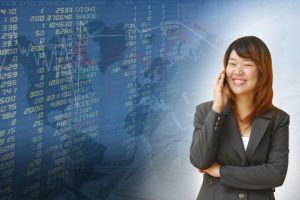 200 Years and Many Firsts Later…

The “Fearless Girl” was recently separated from the bull, and relocated in 2018 to Wall Street, near the entrance to NYSE. In its new position, it can also be read as a call to honor those women in the past who did make their way inside the financial institution, most of the times being “the first and the only” among men.

The timing of the statue’s relocation was more than appropriate – as 2018 was also the year Stacey Cunningham was appointed as the first female president of the NYSE. This appointment is historical in light of the fact that Wall Street’s association with the financial world began 226 years before. Cunningham raised hopes that the glass ceiling of Wall Street leadership has a big new crack. 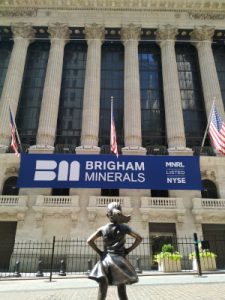 Two centuries back, a long line of pioneering women paved the way for the likes of Cunningham to the male-dominated financial market of New York, and the world. One of the first firsts was the first lady Abigail Adams, who traded in bonds in the late 18th century. She did so while overcoming the fact that her property legally belonged to her husband, using an uncle to act as a trustee for her. This creative solution made her the earliest documented female investor in US history.

She was followed by Henrietta Hetty Green who used Wall Street to become “the richest woman in the world of the late 1800s”. Born to a rich family, and exposed to financial newspapers in her teenage years, Green invested her inheritance in stocks and bonds, becoming famous with the not so kind nickname “Witch of Wall Street”.

Around the same time, Victoria Woodhull together with her sister Tennessee Claflin became the first female stockbrokers on Wall Street. Woodhull later was quoted saying that her motivation wasn’t a professional one, but rather a way “to plant the flag of women’s rebellion”. Similar to the Green’s reception, they were referred to in the press of the time, as “the Queens of Finance” and “the Bewitching Brokers”.

About a century later, in 1964, Isabel Benham became the first female partner in a Wall Street bond house. To get to that position, she had to insist on studying economics when the course was not offered to women, and later sign her name with initials to conceal her identity as a woman.

In the same decade Muriel “Mickey” Siebert made another significant achievement which gave her the title “The First Woman of Finance”, when in 1967 she became the first woman – alone among 1,365 men, to buy a seat on the NYSE, and later when she founded her own firm, she also became the first woman to own a NYSE member firm. She left a seemingly banal yet important legacy when she insisted that there be installed a ladies’ restroom on the seventh floor of the stock exchange – which happened only in 1987.

More recent achievers of Wall Street include Maria Bartiromo, who in 1995 became the first journalist to report live from the floor of the NYSE; and Lauren Simmons, who in 2017 at the age of 23 became the youngest female trader in the history of the NYSE, at the time she was also the only full-time trader on the floor and the second black woman in that position. 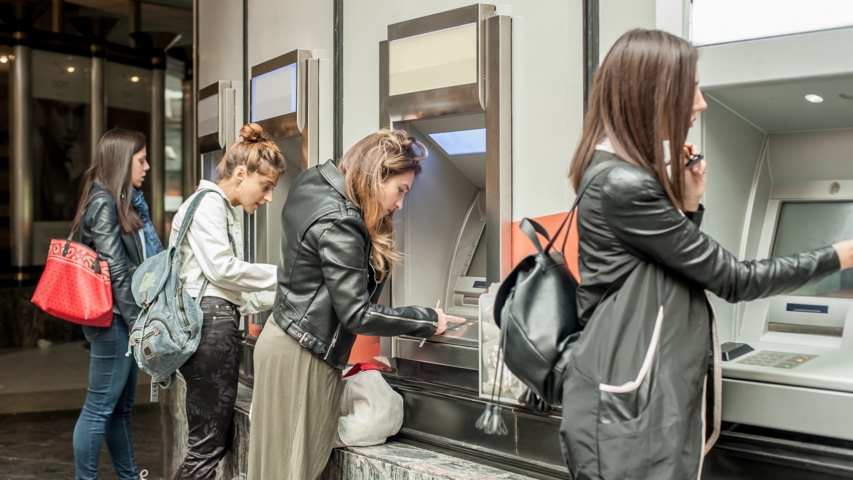 In the meantime, on the other end of the market – that of the consumers – finance becomes more and more accessible as a field of interest to female audiences. With more savings and spending power, women increase their share in the investors’ sector.

The global technology of Internet and smartphones helps to accommodate the appetite for financial education – there are many financial blogs and newsletters written by women for women, and their audio alternative: financial podcasts hosted and created by women. All those tools are free and easy to consume, comparing to traditional financial literature that has at times exclusive language suitable only for graduates of relevant degrees.

Another evidence of finances becoming more popular among women are investment clubs, where groups are formed to learn together about the stock market and invest collectively. The most famous cultural appearance of those was the “Beardstown Ladies” – pensioners investment club from Illinois which gained media attention when published an investment guide in 1995. Some studies even find that women investment in stocks generates slightly higher revenues, that are attributed to more patient and less risky trading behavior comparing to male investors. 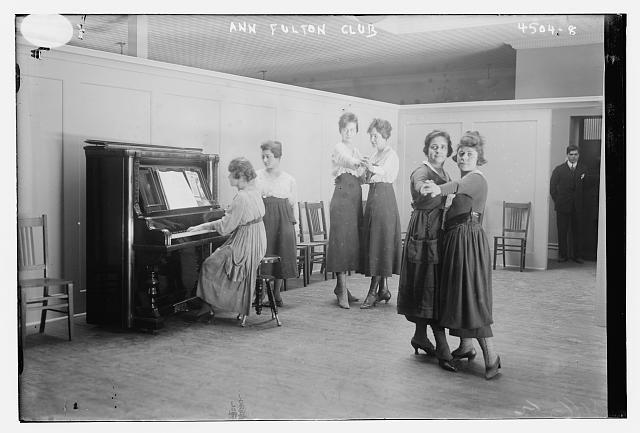 1917, women dancing at the Ann Fulton House in Manhattan, which was set up for women working on Wall Street during World War I. Photo credit – Bain News Service, Library of Congress.

Walk and Taste the Financial Buzz

The financial institutions are not only an extremely important part of our modern society, but are also filled with adrenaline, fast tempo, excitement, and fun. Following the above-mentioned paths of women in this field, and due to the blessed growing interest of women in it, we encourage you to combine this part of town while visiting the area, to learn about the history and the current atmosphere, and to experience a different yet central part of New York City.
To take a picture with “Fearless Girl” one can take a walk through Wall Street, or join a guided tour for a deeper understanding of the history of New York’s Financial District. Several companies are offering themed walking tours of the area – such as “Financial Crisis Tour” or “Wall Street Insider Tour”.