Like many cities around the world, so does Washington, DC embrace commissioned murals in growing numbers, a means to beautify the streets and encourage social media visibility to the city’s potential as a tourist destination. Unlike the masculine subculture of self-motivated graffiti, the institutionalized murals allow more visibility to female artists: without the fear of being arrested, they can now do their work in daylight on authorized walls, and get a name credit for it.

Despite the more welcoming conditions, female contributions make up a tiny portion of Washington, DC’s street art offerings. When they do get to the streets, female urban artists of the capital tend to use their art to speak to “girl power” and highlight women. By doing so, they are bringing a feminine touch and gender equality not only to the identity of the signed artist on the wall but also to the aesthetics and the content of the piece.

The art pieces listed below are of murals and street art made by women, which are spread in several neighborhoods around the city.
Street art by its nature is temporary; therefore sometimes you might arrive at a location, and the work will not be presented there anymore. On the plus side, you might find a new artwork pop up, so keep an eye on the walls while you are exploring the city.

One of the new murals in the district! it was created in October 2020 by the talented and self-taught artist Rachel Wolfe Goldsmith. The project was initiated and commissioned by #SheWillRise, who are working to “ensure greater equality in America by ensuring a Black woman justice on the US Supreme Court for the first time ever.”
This powerful mural depicts women of color in the front, some are holding signs calling to vote. The US Supreme Court is in the background. “SHE WILL RISE” is written on the top in big, bold letters.
“I wanted [the mural] to have movement and kind of appear almost dreamlike– like these are all the possibilities of what can be,” said artist @Wolfe_.pack.

Karlisima was born in El Salvador and is now based in Washington, DC. She has created the “Presidential Mural” on the wall of “Mama Ayesha’s” restaurant, which is a local institution, operating since 1960. The mural depicts 11 US presidents – from Eisenhower to Obama – standing in line, and in the middle between them is the founder of the restaurant “Mama” Ayesha Abraham. Her grandnephew, who runs the restaurant, says “She was the American dream. For a Muslim and Arab woman immigrant from Palestine to come here on her own and build this business, is a remarkable legacy”. It took the artist more than two years to finish the 60×25-foot mural. One day, a few years after it was completed, the mural got an anonymous addition – red paint splashes on all the presidents, with the image of the Mama in the middle, left untouched.

New Orleans-born artist Anne Marchand got her first major public art project in Washington, DC, which opened the doors for more murals for her. She completed the Westminster Playground Mural in 2002, based on her cityscape paintings. The “Community” mural depicts a colorful historical portrait of Shaw neighborhood – mixing the architecture and residents. 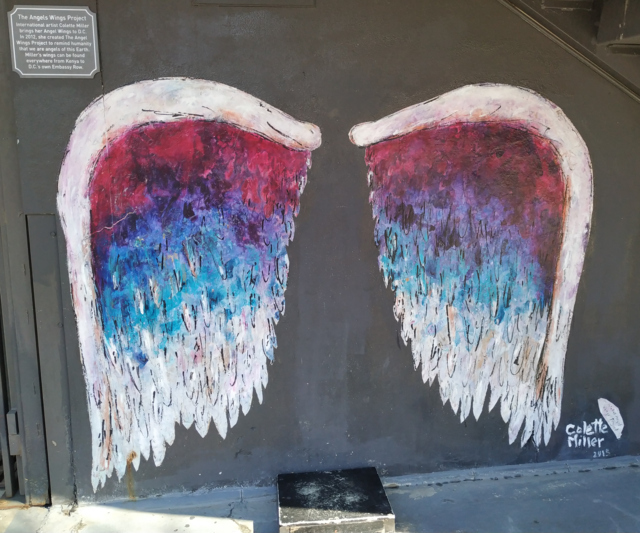 The pair of angel wings, waiting for the “angel” to appear between them is a part of a global project by artist Colette Miller, which started in the ‘city of angels’ – Los Angeles. The human-sized painting became a popular piece of interactive art – encouraging passersby to take photos with it and post them on social media. When she doesn’t spread angel wings in the world, Colette is also a filmmaker and a musician. 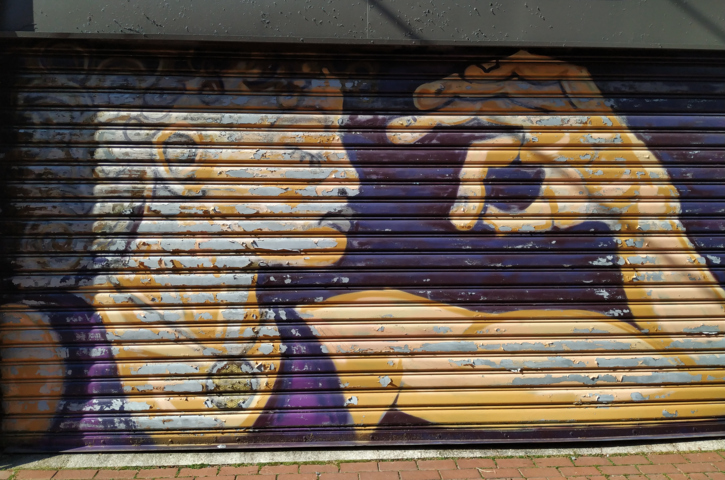 Artist Lisa Marie Thalhammer defines herself as a feminist activist and a member of the LGBTQ community. She did not only focus on her art-making career, but also initiated and co-founded an arts platform called “DC Alley Museum”. The projects build on the local tradition of artists-initiated temporary public displays of their works. In her open-air museum, the works are painted over garage doors. She included herself in the project, creating the mural “Meditation” of a female figure in a position of strength and peace.

Martha Jackson-Jarvis has created a mosaic strip around the Anacostia Station, based on her interest in nature and the environment. The “River Spirits of the Anacostia” mosaic pays tribute to the Nacotchtank native people of the area, portraying Anacostia River, with its flow of fish and spiritual symbols.

Hester Catherine Nelson was a WDC-born ceramic artist, who won the 1994 commission to create a ceramic artwork for Lamont Street Park in Mount Pleasant. She designed a work that would not dominate the park – a ceramic-wooden gateway with an ancient feel to it, public benches, concrete medallions, and decorative glazed tiles. A few years after the installation, she died at the age of 36 in a car accident.

Before becoming a sculptress, Anne Allardyce-Tully worked for more than a decade as an English teacher. She created the sculpture “East of the River: Connections” for Congress Heights Metro Station in a site-specific way. She wanted to highlight the interconnections of the Congress Heights impoverished community, expressed in its tradition of civic activism. 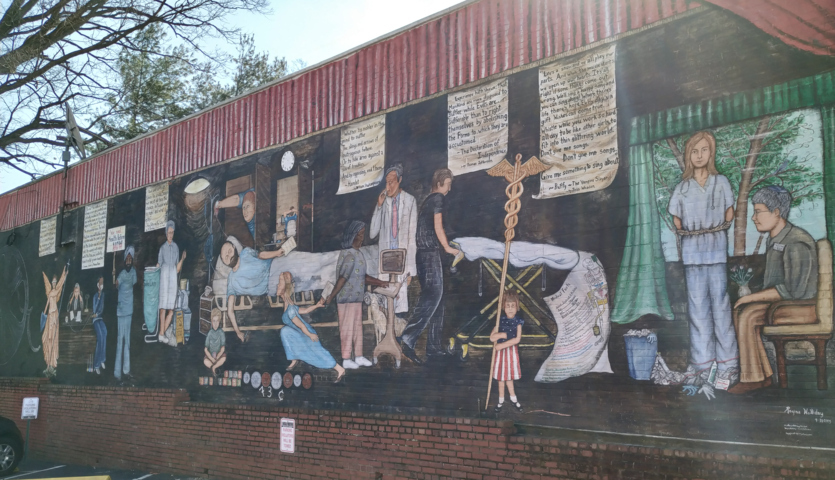 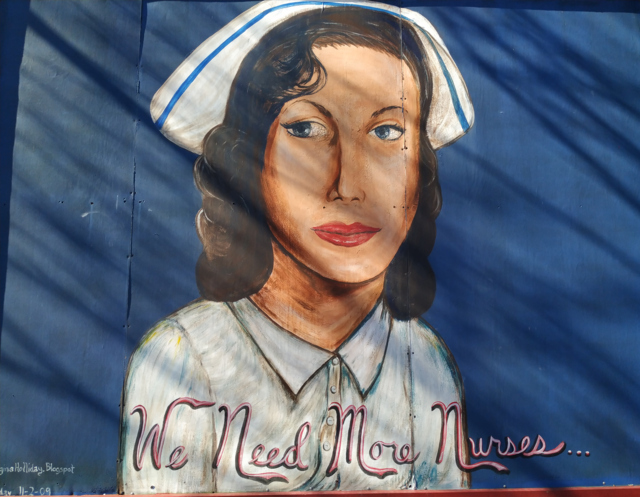 Unlike most of the murals that were commissioned and funded by the city, this 70′ by 17′ mural, located on the back of a gas station, was created with a borrowed ladder and donated paints. Regina Holliday was a toy store clerk and an occasional artist when she lost her husband to cancer. The experience of the health system through his hospitalization has made the widow turn her frustration into public art activism. The purpose behind the mural is to raise awareness to transparency in medical records, and it is titled “73 Cents” as a reference to the price per page for medical records in her case. After the 2009 mural, Regina has initiated more projects for art in service of improving the health system, including painting on almost 500 jackets for “Walking Gallery of Healthcare” and other murals in Washington D.C. 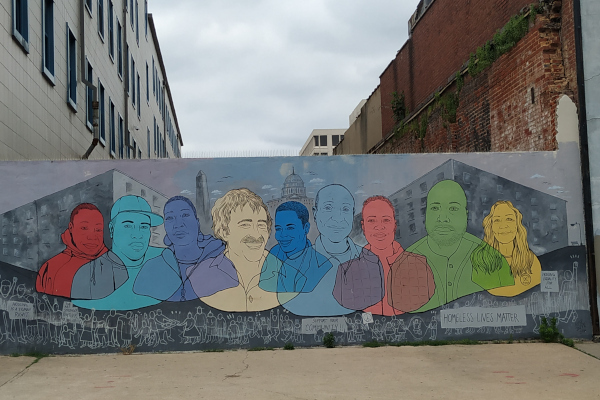 This mural calls for visibility of the increasing issue of homelessness in the capital and encourages respectful approach towards individual homeless people. It is located on a wall of The Center for Creative Nonviolence Homeless Shelter. The faces of the men and women portrayed on it are the residents and staffers of the shelter and its late founder. Underneath the portraits is a depiction of a crowd of people, with the slogan “Homeless Lives Matter” on one of the protest signs. The mural was created by Rose Jaffe, who is a portrait artist and illustrator, born and raised in Washington, DC.

Rose Jaffe collaborated with another female artist Kate Deciccio to create a mural celebrating a local business – a small restaurant. The two artists painted a portrait of the “Soup Up” owner Donna Henry as she eats a bowl of soup. Donna took on herself the mission of introducing healthy soups as a way to nourish her community. The “Cup of Community” mural was created in 2018 on the corner of the restaurant on 709 Kennedy Street, NW. 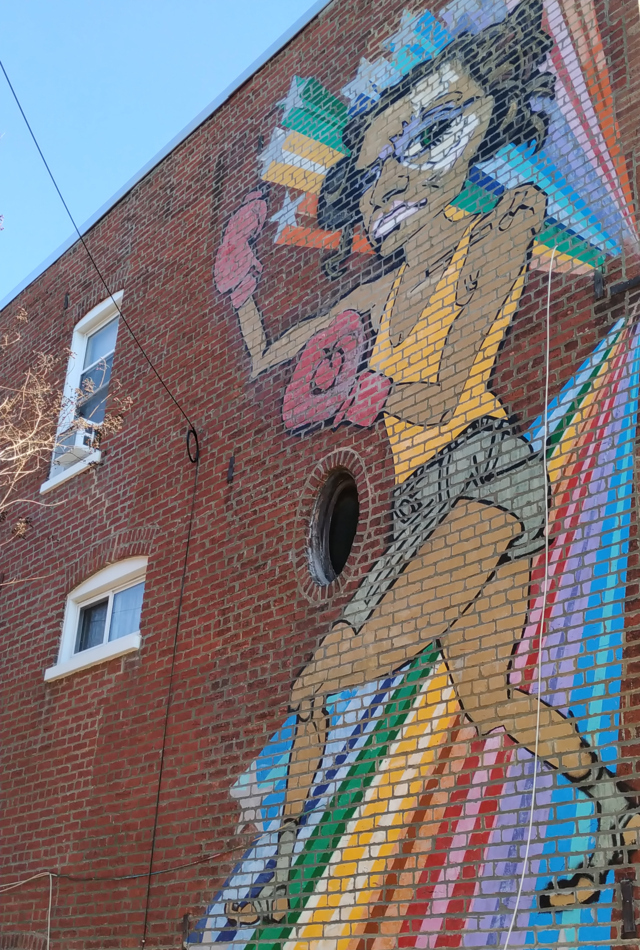 This piece was created in 2009 by artist Lisa Marie Thalhammer on a house which belongs to collector Veronica Jackson. It provoked a passionate debate among some neighbors, with a variety of objections to the mural – its colors-plate, the figure representing “lesbian pride”, looking “too ghetto” or featuring a secret gang code. “Boxing Girl” has won her battle and survived all the attempts to paint her over, and she remains on the wall – wearing her gloves, with rainbows and stars around her.

A mural portrait of Ruth Bader Ginsburg painted on panels that were adhered to the brick wall was created in September 2019 by the DC artist Rose Jaffe.
Jaffe described Ginsburg as “an icon of elegance, grace, power and leadership Who has paved the way for modern day women’s rights in this country through much trial and tribulation.”

There are also several beautiful murals around the city portraying women, made by men: 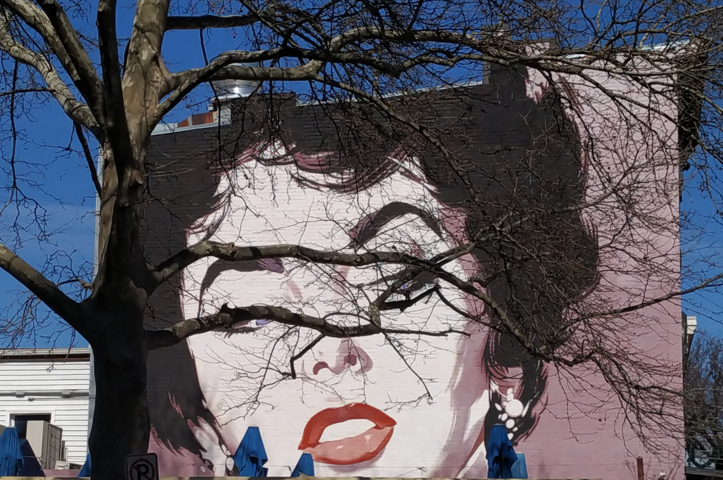 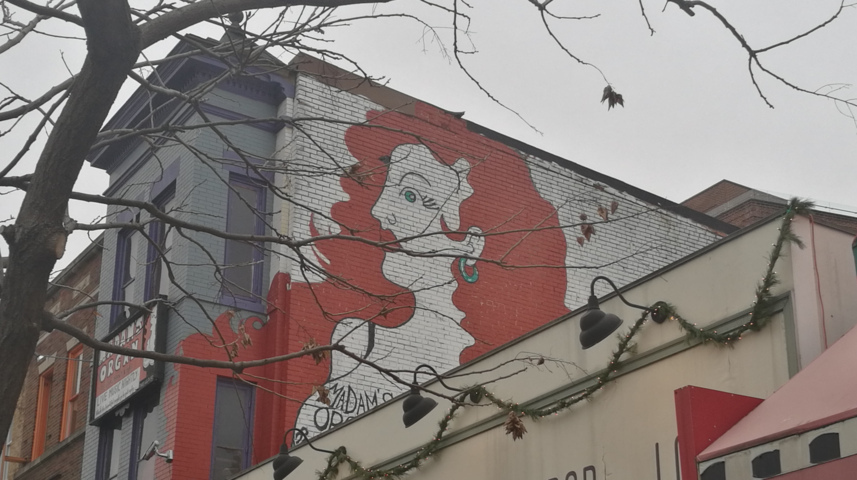 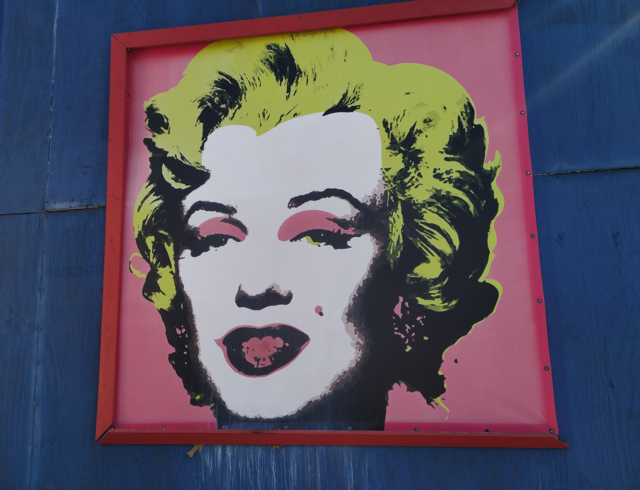