Not surprising for a diverse urban center, New York City is rich with culture, including street art. While spontaneous, self-motivated artworks are hard to follow – they are the most exciting to keep an eye out for while strolling the streets.
As the city is going through various “urban development” projects, the impact of street art has been acknowledged and incorporated into more organized and officialized initiatives. Among those are First Street Green Art Park, The L.I.S.A Project, and 100 Gates Project. The following list focuses on the women who stand out in those streets.
We make every effort to keep the murals’ locations and information updated and accurate. We highly appreciate it if you’ll tip us about any additional #MadeByWomen murals everywhere, or pay our attention to any updates.

Lexi Bella is a painter and street artist based in New York City. She has created many murals in the city, and also in Los Angeles, Miami, Newark, Philadelphia, Detroit, Denver, and Washington D.C. Bella likes working in collaboration with schools and community organizations, turning her process of art-making into a skills-development workshop.
She created a 20′ mural celebrating 2019 International Women’s Day, which is based on an illustration by Malawian-South African artist Lamb of Lemila (Lambi Chibambo) – depicting seven women with different shades, sizes, and styles. The collaboration was supported by Various Roots initiative to promote diversity.

Created in March 2019 in celebration of Women History Month.
Lexi Bella was assisted by volunteers from Ralph Lauren corporate.
The title – “Don’t Tell Me To Smile” – is referencing the common behavior women are faced with when walking the streets, as one of Lexi’s followers commented: “I always get hit with ‘Smile it’s not that bad’ from annoying men!”

Another mural of note from Lexi is a portrait of Congresswoman Alexandria Ocasio Cortez, the youngest woman ever to serve in the United States Congress.
The mural was created for First Street Green Art Park as part of the Inspire Change Art Festival.

Kristy McCarthy (“D.Gale”) is a visual artist and hair braider, based in New York City.
She is working on various community collaborative public art projects, with special focus on her neighborhood of East Harlem.
D.Gale created this mural as part of “Inspire Change Festival 2018”. Her mural is a painting that projects hope – featuring a white dove, a palm of a hand, plants, and an image of two kids from their backs, sitting and pointing to the moon.

Vanessa Powers created this mural as part of “Wasteland” series for First Street Green Art Park.
The dystopian imagery features her signature motif of a plastic bag, with a yellow smiley face on it, and the writing “have a nice day.”
The bag looks old and thrown away, with a skull peeking out from it.
The “Wasteland” series features 20 street artists and is aspiring to raise awareness of environmental concerns. 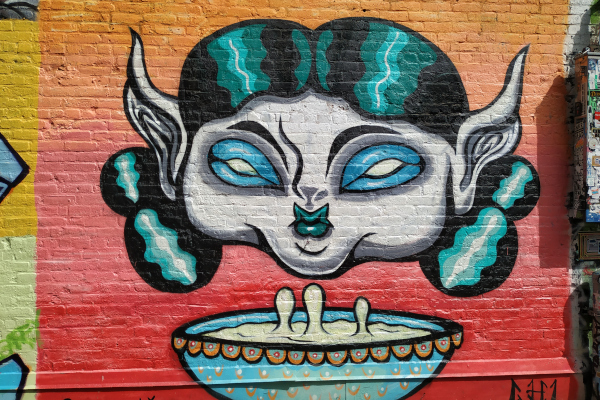 Grace Lang is a Brooklyn-based artist who is preoccupied with the concept of personal demons in her work – reflecting on “the internal struggles that plague us all.”
In this mural, she painted a surreal face of a female-looking creature who is surfacing above a bowl of porridge that rises up, as if boiling. 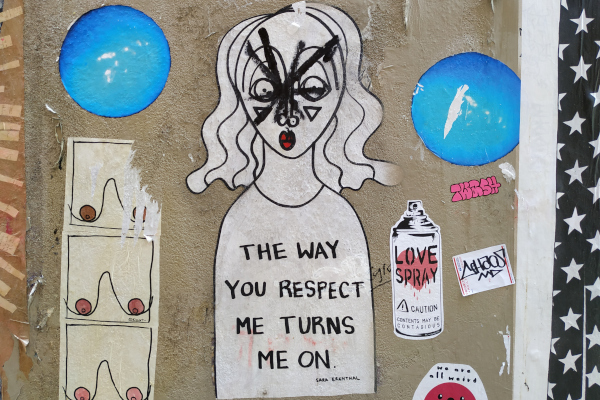 Sara Erenthal spreads her work as a self-motivated street artist and also does murals.
Her signature style cannot be missed – with its simple line-work, two-dimensional female figures, and short texts.
In her street art, Erenthal does upcycled-art, using found objects as surfaces for drawing – such as thrown away furniture or discarded pieces of wood.
She left her ultra-Orthodox Jewish family at the age of 17 and is now based in Brooklyn.
In addition to hundreds of wheat-pastes in her hood, she also ventures to Manhattan to spread her art.
Two of her recent pieces can be found in Freemans Alley near Sara D. Roosevelt Park – both using her signature female figure with the writings: “so tired of these lame dudes” and “the way you respect me turns me on.”

Ten minutes walk from the park, at 323 Broome Street, is a mural by New York-based Spanish artist Gemma Gené.
She moved from Barcelona to the United States to study architecture and developed a career as an artist and creator of an online comic.
In line with the motif of foil balloons in her work, this mural features three yellow balloons with smiley faces with X as their eyes. The balloons are either rising or landing – depending on the interpretation of the person who sees the artwork.
The mural was created for Marshmello and Bastille’s song “Happier.”

A mural honoring the iconic couple John Lennon and Yoko Ono in a black and white portrait.
It was created by street artist Jules Muck (“Muck Rock”).
Jules has been creating street art since the 1990s and is also a mixed media artist, who designs tattoos, paints on vehicles and items left on the street (“garbage bombing”).
She is based in Venice, California.
The mural was commissioned as part of The L.I.S.A Project.

South African Faith 47 is one of the busiest and most visible female street artists currently working across the world. Her recent New York mural is of modest scale, depicting a full moon in Chinatown. It was created as part of the L.I.S.A Project. 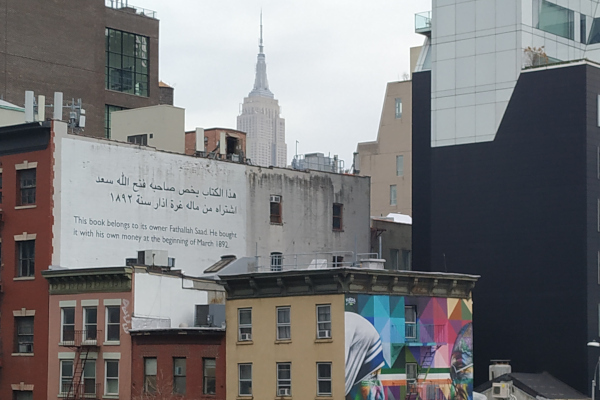 Palestinian artist Emily Jacir is working within the fine-art world, exhibiting her artworks in galleries and museums. Still, she also creates public artworks – in particular works that show Arabic in the United States streets. In this text-based work, it is written in simple black letters on a white background in Arabic and English: “This book belongs to its owner Fathallah Saad. He bought it with his own money at the beginning of March 1892”. The work is based on the artist’s research of books looted by Israeli authorities from Palestinian homes, now kept at the National Library in Jerusalem under the designation “AP” (Abandoned Property). The mural is titled AP 3851, and it can be viewed from the Highline or Chelsea Square Market. 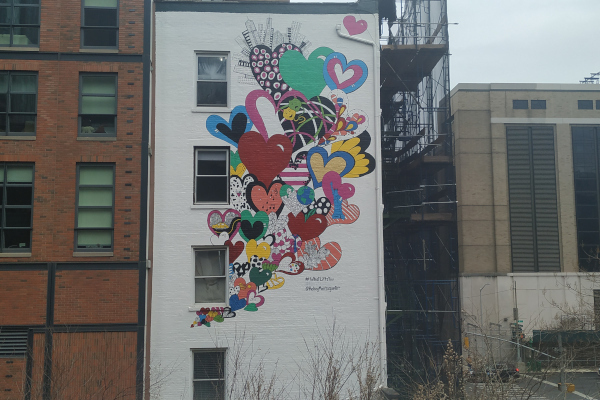 This five-story mural facing the Highline was created by Kelsey Montague, who is famous for painting magnificent wings all over the world. Montague is considering this mural as a ‘love letter’ to NYC, with many items related to the city hidden inside the piece. All of Montague’s artworks invite the observer to interact with them. In this mural, one can take a picture as she put her hand below the first heart as if she is blowing hearts.