The monuments in Washington, DC, are one of the main reasons to visit the capital of the United States of America. It is something unique only to DC.
Key events and leaders in American history are commemorated in the beautiful environment of the National Mall, Tidal Basin, and the nearby Potomac River.

This is a self-guided tour to discover the key monuments and memorials in the National Mall and Tidal Basin area. Admission is free to all, and clean restrooms can be found in Washington Memorial, Lincoln Memorial, and FDR Memorial. We recommend to pack lunch or snacks and enjoy a picnic outside.
Touring the monuments at nighttime is another option, not only to avoid the crowds, but also enjoy a different atmosphere created by the lights decorating the memorials.

Recommended time: Any season when the weather is welcoming a walk outside, just be prepared with an umbrella since even in the summer there might be rainy days.

Duration: The tour’s total distance is 3 miles. The easy walk takes about two hours, but add another two hours to explore each memorial and enjoy a picnic or just a rest time on the National Mall.

Arriving at the starting point: The closest Metro station is the Smithsonian Station.

This tall stone obelisk is commemorating George Washington, the continental army’s commander in chief, the first president of the USA, and one of the nation’s founding fathers.
It was the first monument built in DC. The construction started in 1848, and it opened to the public in 1888. Overall it took 30 years to build; the delays were due to funding issues and the Civil War.
Standing 555 feet tall, making it the tallest building in the world back then, and today it is still the tallest building in DC and will stay so, by law. It is also considered as one of the best view spots in the area.
In the past, women and children had to climb 898 steps since the elevator was not considered safe. Nowadays the access to the top of the monument is open to all.
Tickets (free) can be reserved online for up to 90 days in advance. There is a small number of walk-in tickets that can be picked up since 8:30 AM at the Washington Monument Lodge (located outside of the monument circle).
For more information and reservation, click here.
The monument is circled with the flags of the 50 states.

George Washington married Martha Washington, a widow who was one of the richest women in the area. She became the first First Lady of the United States once he became President. 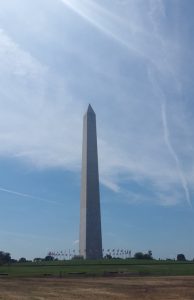 The National World War II Memorial commemorates the 16 million American soldiers who fought in the war, the 400,000 Americans who lost their lives, and all the millions of people who supported the effort from home.
Opened to the public in 2004, after three years of constructions and 20 years of approvals and fundraising, most of the funding came from the public.
The memorial in an elliptical shape with a large round fountain in the middle, and 56 granite pillars organized in two arches from its south (“Pacific”) and north end (“Atlantic”).
Each pillar represents a state, as well as the Alaska Territory, Territory of Hawaii (both joined the US in 1959), District of Columbia, Puerto Rico, the Commonwealth of the Philippines, Guam, American Samoa, and the U.S. Virgin Islands. The walls present scenes from the war. 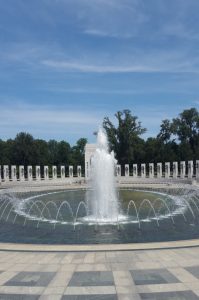 A memorial honoring the soldiers who fought, lost their lives, were unaccounted in the Vietnam War, in Vietnam and South-East Asia.
It consists of three different memorials: the Vietnam Veterans Memorial Wall, the Vietnam Women’s Memorial, and the Three Soldiers Statue.
The Vietnam Veterans Memorial Wall was designed by Maya Lin and revealed to the public in 1982. It has two long tall black granite walls documenting almost 60,000 names of servicemen on 140 panels. There are 8 women honored on the wall. The stone is polished and causing a mirror-effect, with the purpose to bring the past and present together. 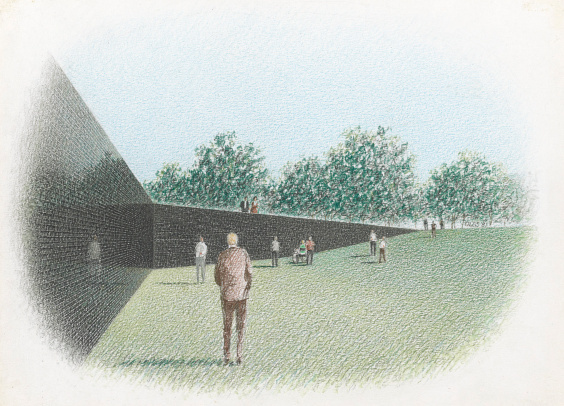 The Vietnam Women’s Memorial is one of the first national monuments honoring women’s contribution to the Vietnam War; most of them were nurses. Therefore it depicts three uniformed women treating a soldier.
The memorial was designed by Glenna Goodacre and was revealed in 1993. Click to read more. 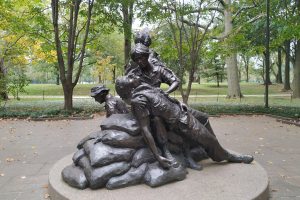 The Three Soldiers Statue is a bronze sculpture of three different soldiers; each symbolizes a different ethnic group who fought in the Vietnam War: a European-American, Latino-American, and African-American. It is the first appearance of an African-American in the National Mall. The statue was dedicated on Veterans Day 1984. 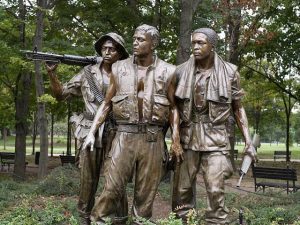 A Greek-style temple memorial is honoring the 16th president of the United States, Abraham Lincoln.
Lincoln’s statue is 19-foot-tall, sitting in an open chamber.
The construction of the foundation and the building took eight years to complete, and four more years for building the statue. Some say that the memorial design is too extravagant for the humble character of Lincoln.
Lincoln served as the US President from 1861, during the Civil War, until he was assassinated in 1865.
Lincoln’s wife, Mary Todd Lincoln, was with him at this moment in President’s Box at Ford’s Theatre on Tenth Street in Washington.
He was a strong leader, supported the abolition and the union, and strengthen the federal government.
His first memorial stood in front of the District of Columbia City Hall three years after his assassination.
Since always, the Lincoln Memorial hosts many events, parades, and rallies. Among the famous ones are the 1939 Marian Anderson integrated concert, the 1963 Martin Luther King “I have a dream” speech in the Civil Rights March, marches for peace in Vietnam and more. 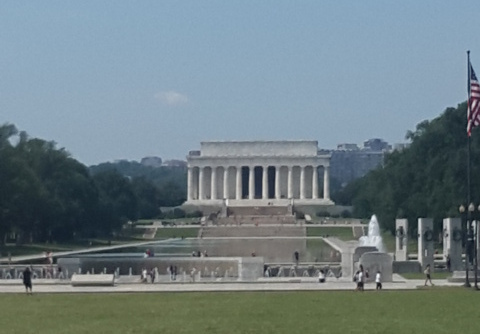 Dedicated in 1995, 42 years after the end of the Korean War (1950–1953) between South Korea and North Korea.
The memorial dedicated to the American and UN soldiers and contains the Mural Wall, the Pool of Remembrance, and 19 tall stainless-steel statues of American soldiers dressed in full combat gear.
The Mural Wall is made of polish black granite presenting photographs of the landscape, the soldiers, and the scenes related to the war. 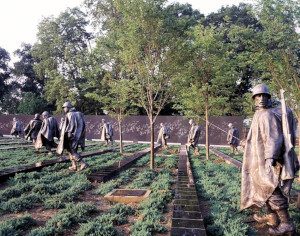 This memorial commemorates Dr. Martin Luther King, Jr., the leader of the Civil Rights Movement, who was assassinated in 1968. After several years of planning and fundraising, its official dedication ceremony was scheduled to August 2011, the 48th anniversary to his famous “I have a dream” speech, but it got delayed for few months due to a Hurricane.
Located in West Potomac Park, near the National Mall. Its official address is 1964 Independence Ave., which commemorates the year the Civil Rights Act of 1964 became law.
The sculpture of Dr. King is carved on white granite stone and is named the Stone of Hope, inspired from his “I have a dream” speech, which he gave on the steps of the Lincoln Memorial in 1963: “Out of the mountain of despair, a stone of hope”. 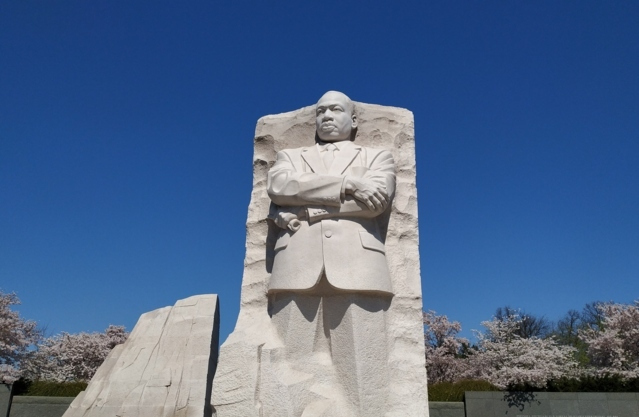 This is the largest memorial in D.C, commemorating Franklin Delano Roosevelt (FDR) and the American history during his presidency, in the times of the great depression and World War II.
FDR was the 32nd President of the United States, who served 4 terms for 12 years, the longest-serving period of a president.
The memorial opened to the public in 1997, and it presents four rooms, one for each of his terms. FDR was originally presented sitting in a chair as he appeared to the public until, in 2001, the National Organization on Disability raised money to add a statue of him sitting in a wheelchair.
On the walls are written 21 of his famous quotes.
The Eleanor Roosevelt bronze statue is standing in front of the UN sign in one of the rooms, as the first US delegation to the United Nations. Besides being the First Lady, she had an active career of her own, took part in several organizations, fought for equal rights and women’s rights. This is the only presidential memorial honoring a First Lady. 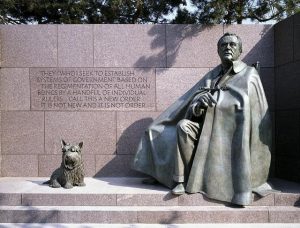 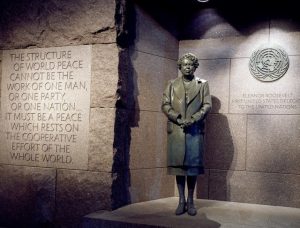 Dedicated to Thomas Jefferson, the writer of the Declaration of Independence, one of the founding fathers, and the 3rd president of the United States. The memorial was dedicated by FDR in 1943, who also laid the cornerstone four years before.
It was designed as a pantheon in neoclassical architecture style. A 19 feet bronze statue of Jefferson standing in the middle of the Dome, and five of his quotations are written in the interior.
The memorial is located in the south bank of Tidal Basin.
Jefferson was married to Martha Skelton Jefferson, who was the First Lady of Virginia. The couple had six children before she died. He later had a hidden, unconfirmed relationship and five children with Martha’s half-sister and his slave, Sally Hemings, which he denied, but DNA tests of their descendants years after confirmed it. 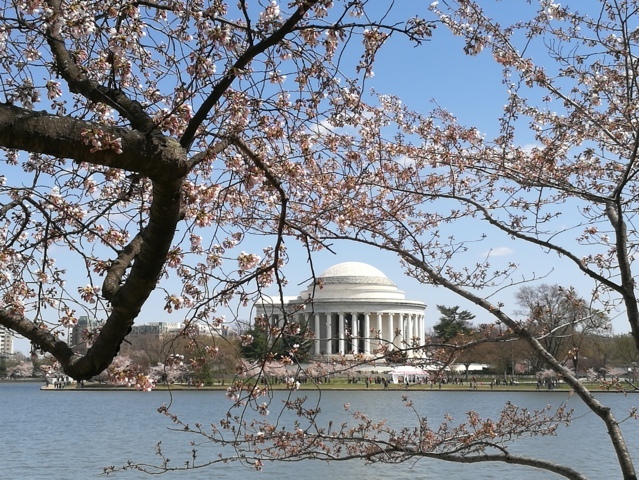