Less than an hour drive from Boston, the town of Salem offers its visitors an interesting slice of history, mixing gender politics with mysterious tales – the infamous 300 years old Witch Trials.

Among the most studied events in Colonial American history, Salem Witch Trials cost 20 people their lives and about 200 people their freedom and good name. Majority of the accused and the executed were female, and the decision makers were male.

Since then, the story became the main source of local tourism traffic. Many women take part in current Salem “witches’ economy” – including business owners and authors.
Jump to the list of things to do in Salem.

Who is Afraid of Strong Women? The Brief History of Witches

The figure of a “witch” in Western imagination can be found making love potions or cursing her enemies in Greek mythology and Roman literature. From 14th century Europe, the practice of “Witch Hunting” was associated with the religious belief that the forces of evil could harm people through the agency of those declared witches.

Mainly women were hunted and executed as witches. Most of them were of older age, of vulnerable social status, foreigners and all had exceptionally developed skills or knowledge.

In the 19th century, suffragist Matilda Joslyn Gage dared to point out to the link between persecution of witches and repression of women’s intellect in the name of misogyny. In her 1893 book, she devoted a chapter to analyzing witchcraft as a political institution. She wrote that “a vast amount of evidence exists, to show that the word “witch” formerly signified a woman of superior knowledge”.

The use of the term “witch” towards powerful women by their male opponents recurred in recent US history. Most infamously during the 2016 presidential election, candidate Hillary Clinton was called “The Wicked Witch of the Left”.

A recent US survey reveals that one of every 5 persons in the US believes in witches.

Contemporary feminists and influencers have taken on the mission of reclaiming the term “witch”. Instead of it being used by men to vilify women, equal rights activists rebrand “the witch” as a symbol of power. In protests, for example, banners are calling “Hex the Patriarchy”. 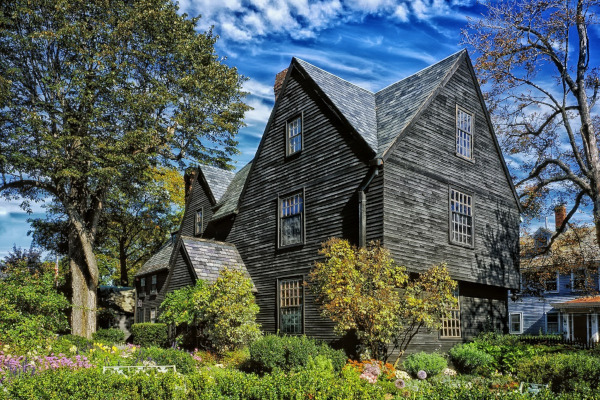 The Women of Salem Trials

It all started with the daughter of the village’s first ordained minister – 9-year-old Elizabeth Betty Parris and her cousin 11 years old Abigail Williams. The girls were behaving in a way that seemed strange to the community, and the local doctor attributed it to supernatural causes.

Under pressure of investigation, the girls blamed three local women for bewitching them:

The three women – who were easy targets due to their low social status – were put in jail. More and more accusations followed, fueled by paranoia.

A Special Court was established. The first case brought before it was that of Bridget Bishop. The older woman was declared guilty and hanged, despite claiming to be innocent. She became the first of 19 people executed in Salem Witch Trials.

The official hunt left as quickly as it arrived. Within a year all those who were charged with witchcraft in Salem were pardoned.

But justice was slow to be restored. Tituba was sold to pay for her jail costs. Her position as “an outsider” among colonial white Puritans was addressed in a 1986 novel by Maryse Condé, called “I Tituba, Black Witch of Salem”.

The town continued its process of healing the harm done by the trials:

Until Today, historians, scientists, artists, sociologists, and psychologists are fascinated by the Salem Witch Trials. The 1692 events are now attributed to a complex combination of forces: colonial politics, religion, gender, economics, boredom, and even weather.

One of the studies, published in 1976 by psychologist Linnda Caporael, explained the behavior of the little girls with a fungus ergot, which was likely consumed by them in wheat and caused hallucinations.

Click to watch images of tourist attractions around Witchcraft in Salem:

21st Century Salem Embraces its Past and its Women

Witches remain the main tourist attraction in Salem. More than 250,000 people visit the town annually. “Haunted Happenings” that take place in September and October draw the most crowds.

All year-round tourist attractions around Witchcraft located in downtown Salem, around Essex St., include:


* Getting to Salem from Boston is possible by the Newburyport/Rockport Line. The train leaves from North Station *

Other women who stand out in local history are:

Today Salem makes efforts to celebrate the achievements of its women, not only as victims, and in 2006 Salem welcomed its first woman into the Mayor office. Mayor Kim Driscoll is the 50th mayor of the town.

Get into the spirit and wear a proud witch T-shirt: