The first time bicycles were introduced in the United States – they became strongly associated with the women’s liberation movement. Not only did they provide freedom of movement, but they also influenced the sense of orientation in the outdoors, accelerated dress reform, introduced map-reading skills, allowed the urban women to explore nature, and traveling, and improved their well-being, both mental and physical. The journey to political empowerment was made much faster.

The First Decade of Women on Wheels: Many Layers of Freedom

The first bicycles didn’t impress the masses – not the men and nor the women. They were too clumsy and hard to use, with a huge front wheel and a high seat. It took a few rounds of improvements – the central being the chain – to bring the vehicle to its popularity boom. The “winning” model was the “safety model”, which had two equal-size wheels. It swept the United States by storm in the 1890s. The general hype was overwhelming, and among the many social changes, the new vehicle paved the way for the “new women”.

It is estimated that just before the end of the 19th century, there were 2 million female cyclists in the United States. Middle and upper-class women enjoyed the invention the most. As an editorial from 1896 describes: “To men, the bicycle in the beginning was merely a new toy […] to women, it was a steed on which they rode into a new world”.

What was it about the bicycle that accelerated female empowerment? First of all, as a means of transport, it was very liberating. Unlike horses or trains, it allowed spontaneous, affordable, and individual freedom of movement. In addition, the bicycles encouraged women to master new skills like fixing flat tires, spatial orientation in the public sphere, and map literacy. Cycling was perceived as a multi-layered “intellectual pursuit”, which connected its users with a diverse set of knowledge, including mechanics, physiology, climate, topography, and geography.

Female cyclists enjoyed broadening their horizons not only in the geographical sense but also physiologically: bikes introduced mental liberation to women. The experience of the thrill from a fast bike ride encompassed a new sense of freedom and excitement. The ease of using the wheels allowed women to be self-reliant and independent outside of their homes. Cycling was associated with building more courage and self-respect – revealing to the riders their own powers. 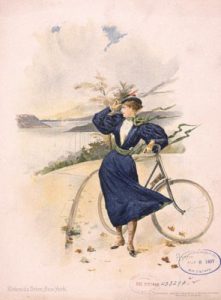 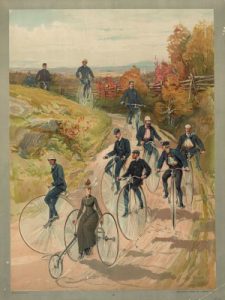 Cycling and Writing: Touring The Countryside and The World

Where did the first female cyclists go? Bicycles were the tool for practical transport and leisure. Some explored new corners of their cities, like parks, others used the bike for errands like going to the store or visiting friends. Many went out of town to get to know the nature around their cities. Some even speculated long-distance romances were now possible with lovers who were based far away.

Bicycles opened women not only to their own towns but also to the joys of traveling the world. The 1890s American magazines published accounts of “ordinary women” cycling through various European countries, describing landscapes and practical solution to packing or finding accommodation on the road. Bicycle literature intertwined with “touring” literature.

The most famous American woman to celebrate the link between the two was Annie Londonderry, who became an international sensation when she left her family for 15 months to cycle around the world in the mid-1890s. She published a series of articles and photos of her experiences in Europe and the Far East.

Writing and cycling went well together. Many women published their impressions of the new vehicle – in newspapers, magazines, and books, which contributed to the popularity of it. Some wrote practical advice such as recommended trails, and others more poetic descriptions. “The spirit is refreshed, the mind, freed from care, swept of dusty cobwebs, is filled with new and beautiful impressions. You have conquered a new world, and exultingly you take possession of it” described Maria E. Ward in her 1896 book on cycling.

” where she describes her experience of learning to ride a bike at the age of 53. She was well known for her activity in the suffrage and temperance movements and had a large following of women. In her book, Willard describes the bicycle as a symbol of political and spiritual power for women: “the will is the wheel of the mind”.

Capitalism also helped to speed the revolution. The commercial interests of bicycle manufacturers made them address women. In order to increase sales, they popularized the notion of a female cyclist in the public imagination. Women were potential clients, and their status cemented in various advertisements in magazines, as a side effect of marketing strategies.

Not all were swept away by the new trend. Some men and women were resistant to the change represented by female cyclists to traditional gender relations. The critics of the “new woman” used a range of means to discourage the female riders.

Doctors warned of medical threats to women’s health: sore throat from the dust, distortion of menstrual cycles from the exercise, or more original warnings such as a “bicycle face” – an expression of exhaustion and worry caused by careful cycling. Many doctors raised the concern of the dangers of sexual stimulation from contact with the saddle.

The opposition to the “new woman” on wheels was expressed in many caricatures, depicting female cyclists as ridiculous, vulgar and irresponsible towards their families.

Dress Reform for The New Woman

The new means of transport was accompanied by a new fashion, which was no less revolutionary to women’s liberation. The bicycle didn’t go well with the restrictive dresses of the time – it would be nearly impossible and dangerous to maneuver the bike wearing a corset, a long skirt, and a high collar. The freedom machine required more free cloths. The inspiration came from France, where, in 1868, the first-ever women’s cycling race in history was held, with participants reportedly wearing scandalous short skirts to avoid accidents.

In the United States, the new bicycle outfit was called “bloomers”, named after suffragist and publisher Amelia Bloomer. She was central in introducing a new fashion of knee-long skirts with loose pants under them. Those, later developed into baggy trousers, fitted well to the needs of the female bicycle users of the late 19th century.

Bloomer herself had no intention to start a new fashion or to promote cycling. Her main mission was to prevent the use of alcohol. Her becoming the “poster girl” for a dress reform happened by accident, a few decades before the introduction of bicycles. In the 1851 edition of her women-magazine, The Lily, she wrote about the comfort of the new pantaloons she saw on Elizabeth Smith Miller. She published engravings of herself in the new fashion, also known as “Turkish trousers”. As a result, hundreds of readers wrote to her asking for patterns, and the magazine’s circulation increased from 500 to 4,000 per month.

Bloomer was wearing the “phenomenal” outfit for six years, attracting crowds to her lectures on women’s rights. She decided to go back to the full-length skirt after noticing that the new fashion distracted the attention from what she saw as more important issues, such as temperance. 30 years later, the “bloomers” got a new push into popular fashion by the cycling women’s needs. 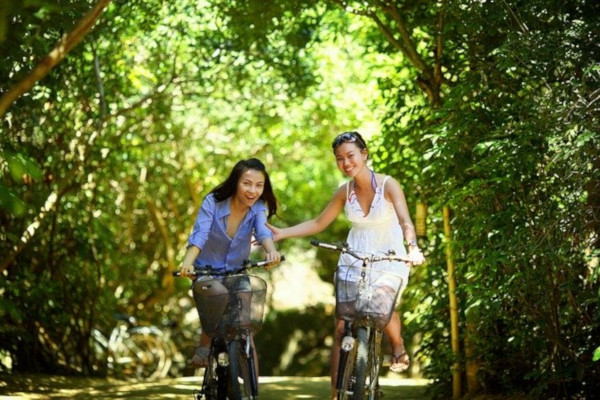 The Ride To The Ballot Got Shorter

Leaders of the US suffrage movement were advocating for both the dress reform and for cycling, as they all connected to the larger battle for gender equality and women’s rights.

In 1896, suffragist Susan B. Anthony was quoted in an interview with New York World’s famous reporter Nellie Bly saying that “bicycling has done more to emancipate women than anything else in the world. I stand and rejoice every time I see a woman ride on a wheel. It gives women a feeling of freedom and self-reliance”. Another famous related quote of Anthony is “She who succeeds in gaining the mastery of the bicycle will gain the mastery of life

Anthony also made an argument linking bikes to voting: she said that women riders are more likely to become active in legislation, by signing petitions for local transport regulations, and hence will become more active citizens. ”From such small practical lessons a seed is sown that may ripen into the demand for full suffrage”.

The British suffrage activists used bicycles to campaign: riding around with banners promoting voting rights to women in the 1910s, and launching a special bicycle painted with the colors of the suffrage movement. 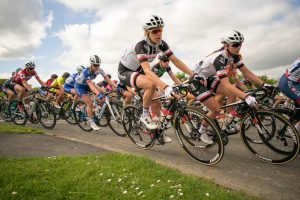 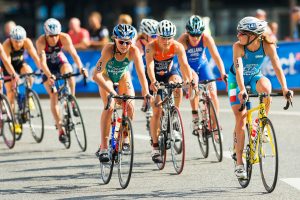 The Olympics Come Last To The Race

Cycling as a competitive sport was introduced to women in later stages. Athletics were still considered a male practice, and as an indicator – women were not invited to participate in the first modern Olympic games in 1896 in Greece. As those restrictions slowly were dropped, women were allowed to the cycling competitions of the Olympics as late as the 1980s. That same time is when also the famous Tour de France opened to women.

That didn’t stop exceptional women around the world from testing their abilities. Belgian Hélène Dutrieu broke the world record for distance traveled in one hour in 1895. British Billie Fleming broke the record for most miles cycled in one year in 1938.

In the late 20th century, more and more competitions opened to women, and women-only races established. That gave rise to a long list of female professional cyclists becoming famous – breaking athletic records and social stigmas of women as fragile or weak.

Today women organize cycling clubs and associations around the US for both competitive sports and pleasure. Initiatives such as “We Bike NYC”, “CycloFemme”, and “Black Girls Do Bike” continue to link bicycles with female empowerment, more than 100 years since that connection was first established. 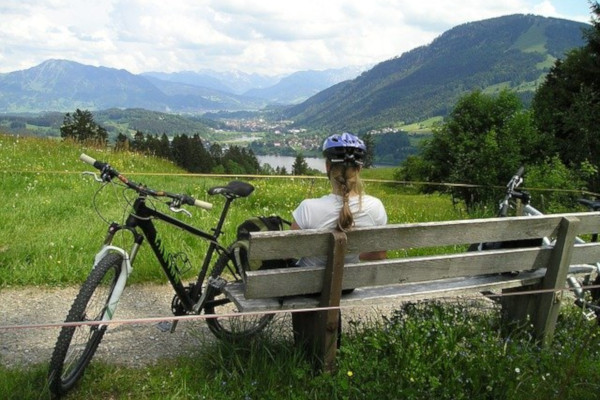 Here are some exciting Bicycle Guided Tours around the US: 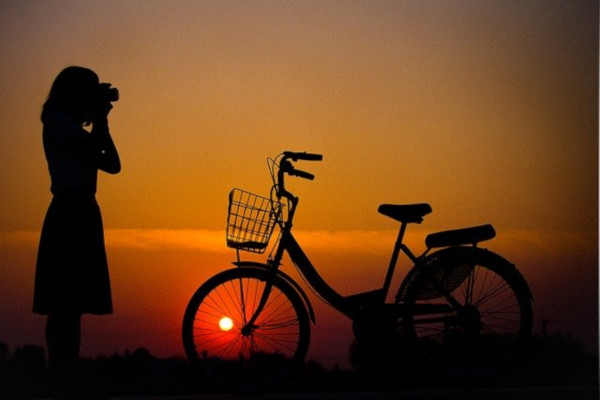