Settlement Houses first appeared in North America in 1886, inspired by the London-based model of Toynbee Hall.

Those were community institutions that fit into the trends of their time and place: addressing the needs of the growing cities, with economic and social gaps between the poor population of immigrants and the newly educated and politically active women of the middle and upper classes. 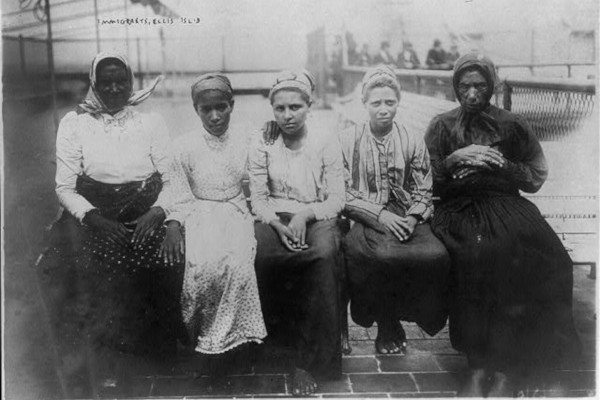 The idea behind the model was to create a homely public space for bridging the classes. The Houses were based in poor areas. They were meant to serve their immediate environment. Those who worked in a Settlement House usually lived there. This was the dominant feature which distinguished the houses from charities.

Settlement Houses offered a range of services: language classes, skills development workshops, courses for children’s playgrounds, lectures, art exhibitions, libraries, newspaper publishing, theater plays and a platform for social organizations, such as labor unions. Some houses also became political institutions, advocating for what they saw as the rights of the underprivileged.

“The aim of the settlement or neighborhood house is to bring about a new kind of community life”, said New York City Greenwich House founder Mary Kingsbury Simkhovitch.

The economic model of Settlement Houses was that of a private non-profit organization. Most of them were funded through philanthropy. 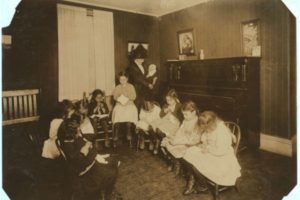 The Perfect Fit for the New Women

Most Settlement workers were from the first generation of college-educated women.

The end of the 19th century was the time of significant growth of the education of women. Yet, society still expected women to focus on marriage and stay at home caring for their children. The graduates of female and coeducational colleges found it hard to step into the working force. The entrepreneurial spirit of Settlement Houses was more accessible to them than the traditional job market.

It provided both an alternative to marriage and a channel to influence the nation. As a hybrid of a home and a public space, the Settlement House was a concept suited to the prescribed gender roles of women as those who are taking care of others.

For the female Settlement House worker, the public work merged with the private life. The houses were substituted for traditional family life – the workers maintained a household together while collaborating on a social goal. This way, the worker enjoyed both professional development, relative freedom from domestic chores, and stimulating intellectual interactions with like-minded colleagues.

70% of Settlement workers were women. Many Settlements were open only to women resident workers and attracted as clients immigrant women and children.

Those were the “new women” – progressive thinkers and activists. Almost 90% of female Settlement workers had a college education – which was rare for women at the time. Statistically, most of them were unmarried and came from well-off families. The median age for settlement workers was 25.

While many were driven by political ideology and the need for personal fulfillment, some were motivated to work in Settlement Houses for religious conviction. Regardless of their motives, those women gained considerable power navigating the public sphere through their work.

With power came the abuse of power. The Settlement House leaders were functioning as agents of social control. The institutions were found as complex spaces where workers often imposed their middle-class morals and opinions of “appropriate home life” upon immigrants.

Although they were well-intended, Settlement workers also were motivated by fears of the changes that might come from the mass of new immigrants. Their different dress, leisure time practices, and approaches to sex were perceived at times as a threat to the social order. 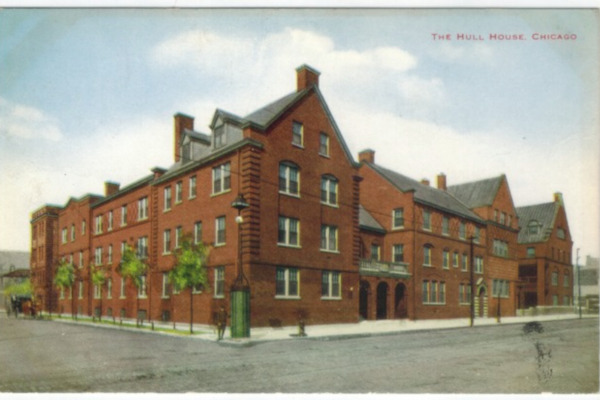 Iconic Settlement Houses and the Women Behind Them

Jane Addams was twenty-nine in 1889 when she established Hull House with Ellen Starr. Hull House was funded almost entirely by an inheritance Addams has received on the death of her father. Addams acquired the first house on Halsted Street and later grew to own thirteen buildings.

Most of its staff worked without compensation. Through the years of its operation, it attracted many progressive female workers and residents. They later came to integrate the Settlement work into the government: Frances Perkins in her position as U.S. secretary of labor, Julia Lathrop as director of Children Bureau and Florence Kelly as the head of the National Consumers League. 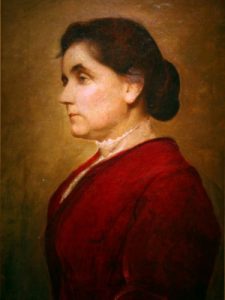 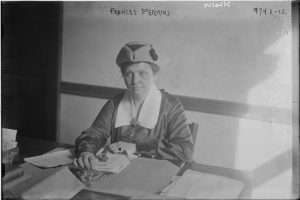 Also known as the Nurse’s Settlement, Henry Street Settlement was established by Lillian Wald in 1895. Wald was an innovative social worker and public health pioneer who earned the status of a national leader in service to the poor.

In addition to nurse house-visits and English lessons, the Settlement helped to establish a Music School, where musicians were trained, and concerts were hosted. Henry Street grew to occupy seven buildings, caring for hundreds of thousands of residents each year. 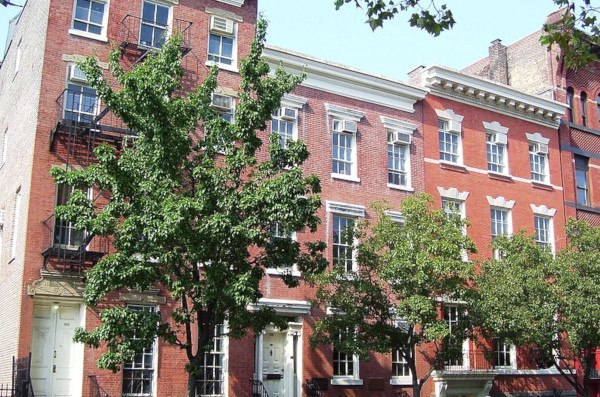 In 1892 a small group of female college-graduates founded Denison House in Boston. The founders included Emily Greene Balch, Helen Cheever, Vida Scudder, and Helena Dudley. Among the services they provided were sports clubs for youth, classes for adults, a library, a clinic, and union organization.

Residents of Denison House had to pay for their rooms, in money and in time: four hours a day to settlement work, one hour to sociological reading and half an hour to light housework.

In 1926 Amelia Earhart came to reside at the house. She worked as a social worker and a teacher. She also contributed to marketing the House events by dropping leaflets from her airplane over the city of Boston. Two years later she would become world-famous as the first woman to fly solo across the Atlantic Ocean.

The Tubman Settlement is exceptional as it was the only public space created, owned, and run by African-American women in Boston at the beginning of the 20th century. Its workers were women of color who were excluded from the city’s other settlement houses.

Tubman House was founded in 1894 by six members of the Women’s Christian Temperance Union. Three years after they were operating from a rented house, they received a building as a donation from Julia O. Henson.

The icon of liberation to the enslaved people of America, Harriet Tubman, used to stay at the Tubman House when she visited Boston.

Looking back from a distance of a century, Settlement Houses left two significant marks on the society of the United States: they contributed to the rise of professional women in the public arena, and they helped redefine poverty.

Prior to the establishment of the Settlements, the 19th-century colonial American society believed that the causes of poverty lie in individual failure. The women working in Settlements helped re-conceptualize poverty as a social problem with structural and environmental contributors.

Today, some of the historic Settlement Houses are still in operation, others have reshaped their activity as NGOs, many have closed, and few are open as museums to the public.

Chicago’s Hull House closed down its social operation in 2012 and is maintained as The Jane Addams Hull-House Museum (JAHHM). The museum provides public tours every Wednesday and Sunday afternoon – see in this link.

New York City’s The House on Henry Street has a permanent exhibition about the Settlement’s history. It is based in the historic headquarters at 265 Henry Street. A neighborhood walking tour app is also offered for the social history of the Lower East Side.

For example, Cleveland, Ohio University Settlement has been active since 1926. In the past decade, it is organizing an annual festival under the title “The Taste of Slavic Village”. Held in October, the event attracts local food vendors and live music.