Home > Explore In Depth > Washington, DC Articles > Suffragists Taking the Streets on Their Way to the Ballot

A fascinating, diverse and at times dramatic journey has led the way to – what now seems to be obvious – women’s right to vote. What came to be known as the US Suffrage Movement, included different suffragists tactics – newspapers, hikes, and fashion – to win the support of the public and the decision makers. The most memorable, and arguably the most significant suffragists tactic, was a series of interventions in urban public spaces: pickets, marches, and parades. 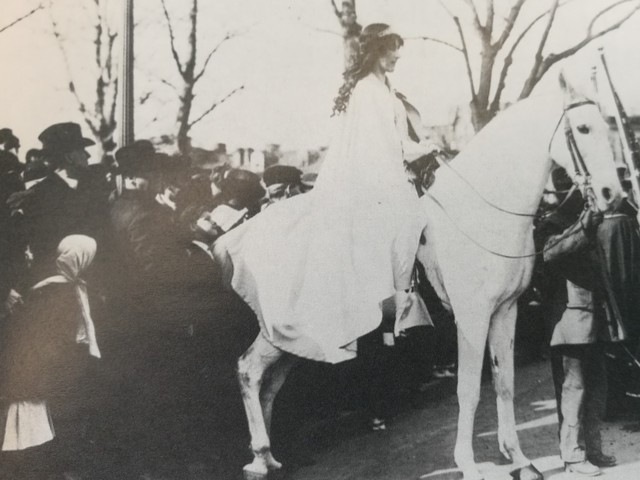 The initiation of the US Suffragist Movement

The origin of the word suffrage, which became synonymous with women’s right to vote, comes to the American English from Latin and Middle French “prayer” and “support”. In its social meaning, there was a tension of meanings between the words suffragists vs. suffragettes. While the neutral “suffragist” stood for a person, either a man or a woman, who supports the extension of voting rights; the term “suffragette

” had negative connotations, referring only to women associated with aggressive activism.

It is impossible to pin down the exact moment of birth of the US suffragist movement, as it cannot be separated from both international efforts towards gender equality, and local abolitionist movement fight for racial equality. Women’s right to vote was only a part of a larger cause, calling for equal rights for women. It came in response to discrimination in almost all aspects of life: women were denied equal access to education, couldn’t own properties or sign legal documents, etc.

Organized signs of resistance to gender inequality were registered in the mid 19th century, expressed mainly in regular gatherings of both female and male activists. In 1840, the now-famous suffragists Lucretia Mott and Elizabeth Cady Stanton were excluded from participating in World Anti-Slavery Convention in London. Inspired by that rejection, they initiated the 1848 Seneca Falls convention. It was not the first gathering of its kind, but in retrospect, it became a crucial landmark in the suffrage journey 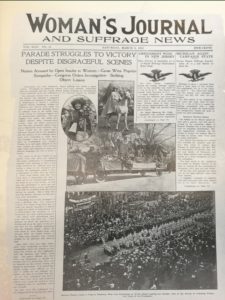 Women’s Journal coverage on the Suffragists parade in WDC. 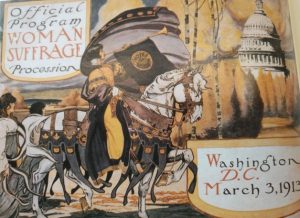 The goal of this historic convention was to redress gender inequality, and it resulted in a written set of resolutions, dubbed Declaration of Sentiments. In a smart and then provocative move, the deceleration corresponded with Thomas Jefferson’s Declaration of Independence. It included various points, calling for women’s equal rights in finances, education, workplace, and church. The point of voting rights was the only one which was not adopted unanimously. Ironically, it eventually became the main point of focus for women’s rights activists in the following decades.

Later came the First National Women’s Rights Convention in Worcester, Massachusetts, followed by a tradition of annual meetings. The frequency of the gatherings represented a shift from organic towards the organized movement. The various tools at the suffragists’ disposal included many newspapers and magazines. Fashion was also identified as a platform for promoting the cause. Suffragists questioned the traditional skirts and corsets and were inspired by their British fellows to use colors in their attire. The colors of the suffragists expressed values: purple for loyalty, white for purity, green for hope and gold for light. Those were used on pins, ribbons, sashes, and dresses.

The call for women’s equality was strongly tied to the abolition efforts. Many suffragists rose to power through campaigning for ending slavery and equal rights to the black community. After the American Civil War, in the late 1860s, the constitution was amended to affirm the rights of the previously enslaved people but stating that only black male citizens will have the right to vote. The 1870 passing of the 15th Amendment marked the shift towards voting as the central cause of women’s rights movement.

The suffragist movement split on this basis – disagreeing whether to support black men’s right to vote on the expanse of the fight towards gender equality. Two rival organizations were formed in 1869, only to be united in 1890. The various organizations focused on publishing and organizing lectures. The orators traveled the country and spoke as often as 200 nights a year. Among the popular lecturers were Anna Dickinson, Sojourner Truth, and Victoria Woodhull, who performed another key publicity stunt when running for the presidency in 1872. 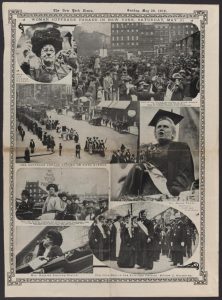 The New York Times article about the Woman Suffrage Parade in 5th Avenue, NYC. Published on 5-29-1910. Library of Congress Collection. 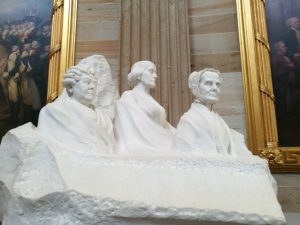 The leaders of the suffrage movement in a group portrait monument in the Capitol Rotunda.

A new century, a new focus – Taking the battle out to the streets

In the early 20th century women gained legitimacy as social activists in other public movements, such as labor laws, unions, and anti-alcohol campaigns. Those contributed to the public re-imagination of female identity beyond their domestic roles, and interconnecting economical struggles with the question of the vote.

Harriot Stanton Blatch, the daughter of the famous suffrage leader Elizabeth Cady Stanton, is credited with introducing the idea of taking the suffrage campaign to the streets. Inspired by labor activists, the suffragists cause gained its public attention when parading, marching and using speakers in street corners. Those methods were then considered militant in comparison to the softer tactics such as petitioning and lobbying politicians.

The most memorable (although not the biggest) of the suffragists’ parades was held along Pennsylvania Avenue, Washington D.C, in a strategic timing: a day before the 1913 inauguration of Woodrow Wilson as the 28th president. Organized by suffragists leaders, Alice Paul and Lucy Burns, the procession featured about 5,000 participants and 500,000 spectators. Among the marchers was the niece of the incoming president, actress Margaret Vale, and activist Inez Milholland, riding a white horse and leading the parade.

Behind the historical happening was the exclusion of black suffragists, who were asked to march separately in the back, to tactically appease the potential racist supporters of the movement. It was not an exceptional practice of white suffragists to exclude their fellow black activists. The ongoing discrimination was the reason for black suffrage activists to establish their association in 1896, headed by Mary Church Terrell. 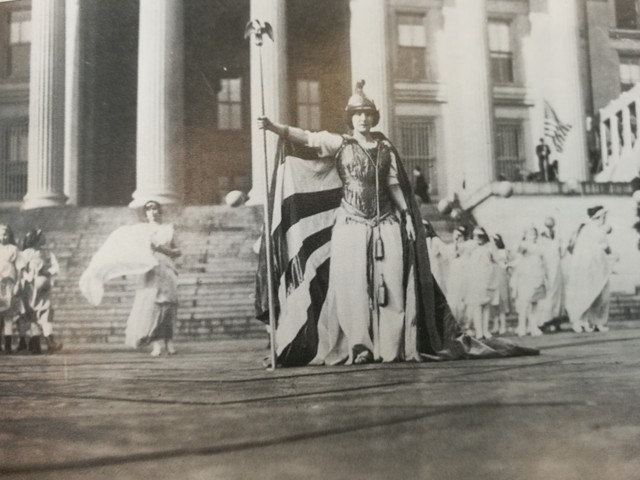 Being out there in all weather conditions

New York also had its share of parades, before and after the iconic Washington DC march. One of the largest of them was a 40,000 participants parade in 1915. Those paved the way for the first suffrage picket in front of the White House, held in January 1917. Through the year, activists stood quietly holding banners, in all weather conditions.

Police responded harshly at times to suffrage activists claiming the streets, which resulted in arrests, detentions, (unpaid) fines, and force-feeding of hunger strikers. Those clashes contributed to the public attention and empathy with the activists.

The spectacular suffrage struggle included swimming competitions, flying planes, and climbing mountains. Long hikes – like the 16-day hike from New Jersey to Washington, DC in 1913 – were the non-urban equivalents of the parades. It was estimated that these hikes generated about $3 million worth of publicity.

The ratification of the 19th amendment

During the years of the struggle, in some states across the country women won the voting right (full or partial suffrage), but the women’s efforts to support the US involvement in World War I persuaded president Wilson to see them as equal citizens. In his 1918 address, the president argued for women’s patriotism as a reason to grant them equal privileges.

In the culmination of all those efforts, with the most photogenic and iconic being the protests in public spaces, the 19th amendment was ratified on August 1920, giving women the right to vote. It is said that only one of the 300 participants of the Seneca Falls convention lived to see the day. Black women had to wait another 45 years to be able to fully exercise their right until the passing of the Voting Rights Act of 1965.

As the centenary of the historic 19th amendment approaches, Secretary of the Treasury announced the intention to redesign the reverse of the ten dollar note to feature suffrage leaders Susan B. Anthony, Alice Paul, Sojourner Truth, Elizabeth Cady Stanton, and Lucretia Mott.

This step is required not only because it is important to honor the suffragists and their remarkable struggle, but also since the presence of this reminder is crucial as part of maintaining the actions for women’s rights in the public sphere, out in the streets. The women can now vote, but there is still much to do and fight for until we reach a more equal society, as the suffragists’ legacy dictates.

And indeed their way continued till these days, as women organizations and activists adopted the march and parade tactics. The 2017 Women’s March, who by now became a yearly tradition to state that “the #WOMENSWAVE is here”, is a proof of that. It is also a reminder that although the suffragists won the battle and gained women the legal right to vote, the fight for gender equality is still necessary, and is still out there. 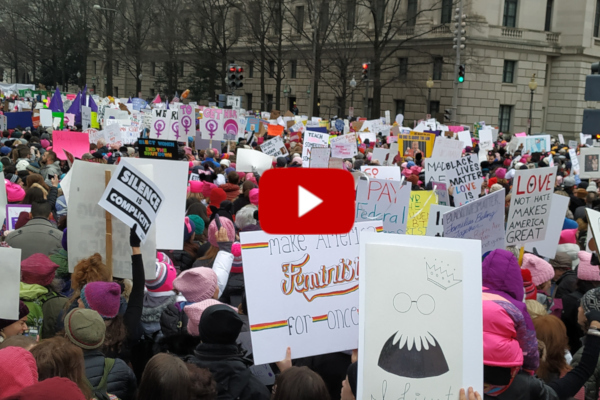 Use the following map to see the monuments, statues, and museums honoring and preserving the leaders of the American Suffrage Movement across the US: