They are blending into the streets we occupy, the highways we drive through. Directing us to turn right, to stop, to be careful around school children and to watch out for falling rocks. They are there to keep the order in public spaces, to prevent accidents or confusion in the navigation of the concrete jungle. Traffic signs

seem to be innocent and functional items. But they have an underlined problematic feature: they portray a male-only reality.

Recent developments around the world are shedding light on the gender erasure on road and street signage, stripping them from their assumed political neutrality. Civic activists and governmental initiatives from the recent decade highlight the often overlooked fact: almost all the characters portrayed in the graphic design of traffic signs are male, and women are hardly ever featured. From New Zealand to Sweden, those pioneering attempts help us visualize how gender equality in US road signs could look like. 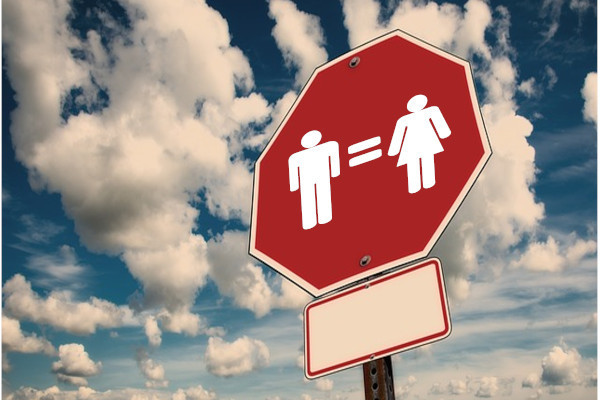 Brief Introduction to US Traffic Signs

The US history of street signs is a male affair to begin with. After the first American automobile was introduced by the Duryea brothers, early 20th century saw the growth of the automobile industry and with it – the need for regulatory road signs to support the increasing traffic. Local clubs and associations in New York and California erected road signs by their own initiative. The idea was inspired by Roman Empire milestones.

In the 1920s appeared the first manuals in an attempt to unify and standardize the design of road signs on a federal level. Since 1935 all states conform fully or largely to the regulations of the Manual on Uniform Traffic Control Devices (MUTCD), with unique localized regulatory signs in cities like New York. In the late sixties, the manual was adopted into federal law. 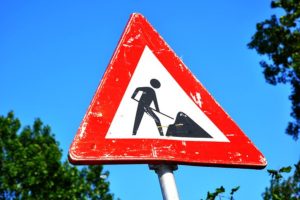 One Skirt Only: an Overview of Human Figures in US Traffic Signs

The road signs featuring imagery of people walking or driving, include: “yield to pedestrians”, “no pedestrian crossing”, “no rollerblading”, “wear seat belt”, “share the road”, “farm vehicle crossing”, “motorcycle crossing”, “playground”, “flagger ahead” and “workers in road ahead”. All those are strictly male imagery road signs.

In addition to traffic signage, images of people can be found in the less familiar cultural and recreational signs, where only male figures are skiing, birdwatching, surfing, hiking, fishing, climbing, hunting, SCUBA diving, golfing, hang-gliding, camping, dumping trash, watching theatre and wood-gathering. A character with a skirt can be found only in the toilet

A unique example of a road sign featuring figures of two females and one male is the contested and nearly extinct “Running Immigrants” sign by the Mexican border in California, portraying a father leading the way, with a mother and a little girl behind him. 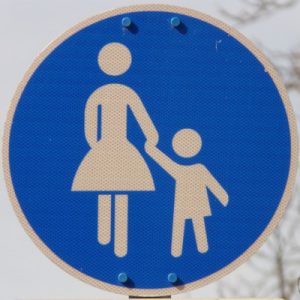 In recent years various initiatives around the world question the implications of gender misrepresentation on traffic signs. In New Zealand the transport authority committed to change the “Linemen” sign with the gender-neutral “line-crew”; In Melbourne a lobby group sponsored a trial of replacing male figures with female on pedestrian crossings traffic lights to “reduce unconscious bias”; Saudi Arabia welcomed the recently legalized women drivers by redesigning traffic signs to read “my brother and sister drivers” and portray long and short-haired drivers icons. The efforts towards gender-equal street signs are in their early stages, coming both from institutions and grass-routes.

Those actions provoked discomfort and resistance not only from dismissive men, but also from fellow feminists who point out to the problematic of stereotypical gender representation. In Sweden, the experiment of introducing a new pedestrian sign with a female figure on a zebra crossing was criticized for being sexist, with a skirt that is too short, and breasts that are too big.

In Finland it was decided to bypass the gender representation minefield, by working towards gender-neutral traffic signage. The graphic solution is to “de-emphasize the physical attributes of the characters”. This decision poses the question, also raised by transgender activists, whether a human figure can be designed as gender-neutral. Since the dichotomy of the iconic male\female toilet signage, what is now assumed neutral might be perceived as male in popular interpretation. 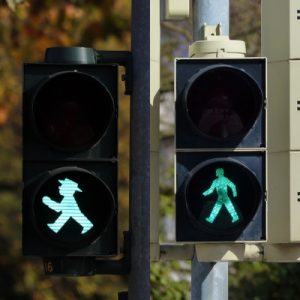 The Social Meaning of Traffic Signs

Critics say the challenges should not prevent an investigation towards the ways of changing the gender misrepresentation of road signs. The evolution of traffic signs is said to provide an insight into social developments, representing the changing norms of a given community. Female critics – like a business owner who sprayed “Wo” in front of the “Men at Work” sign in Atlanta, giving it a graphic gender operation – point out to the underlining messages of symbolism in public spaces, reinforcing male dominance of the streets. According to those voices, correcting visual sexist language will contribute towards empowering women and projecting healthier, more equal, urban environment.

How US streets and roads will be affected by global calls to feminize traffic signs? With recent initiatives in the country – renaming streets to commemorate women, erecting female monuments, electing more women representatives in governmental and corporate institutions – it will be interesting to follow the next edition of the manual on traffic control. Traffic signs are affected by a larger trend towards women reclaiming their share of the public spaces. With statistics showing more women than men walking the streets and driving the roads, the call for representation is timely. It is a fascinating challenge for graphic designers to visualize how this call will be answered.

Continue to this article to learn about how bicycle set the feminist wheels in motion, as a vehicle for female empowerment and liberation. 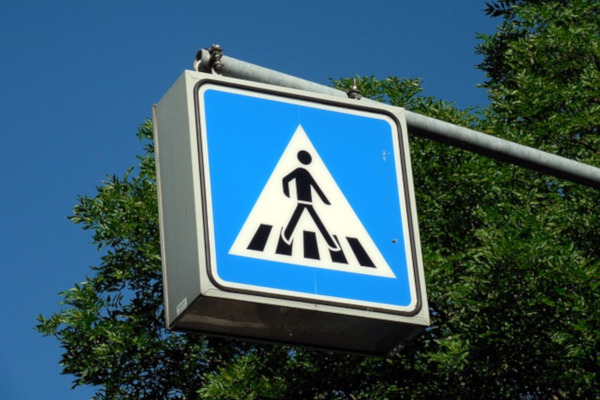