Slavery was a part of US history from as early as the 17th century, and so was the resistance by the enslaved. The quest for freedom took various shapes – slowing down the labor, theft, armed rebellion, and most common – escape.
Enslaved people ran away from their masters towards freedom since the first days of slavery, and their numbers increased to tens of thousands. Safe flight was only the first step, as they needed a welcoming shelter. Those were provided by Native American communities, and later Canada, Mexico and the states of the American North.
Towards the 19th century, a network of secret runaway routes and safe houses came together to support the efforts of rescuing those who escaped slavery. This system was operated by individuals and families, most of them free blacks and sympathetic whites. This network – which was organic and had no leader – became to be called around 1830s The Underground Railroad. 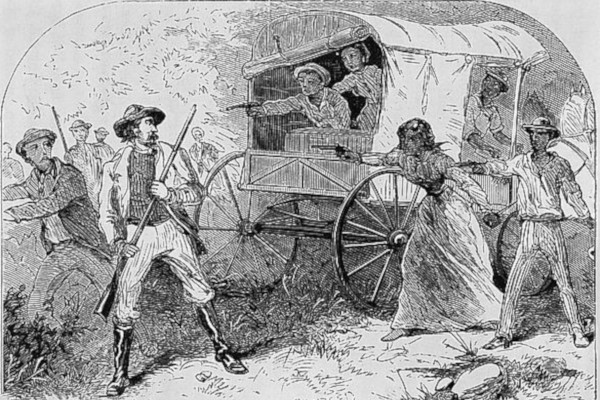 The network name was a metaphor – as it rarely used an actual railroad or underground routes. Its terminology was borrowed from the railway system: with terms such as “stations” for the homes where the fugitives would get food and rest; and “conductors” for the individuals who guided the runaway people to the “stations”. The railway routes were covered mainly walking at night, sometimes up to 20 miles from a “depot” to a “depot”.
It is estimated that The Underground Railroad helped to move between thousands to hundreds of thousands of slaves from the South to the North in the early 19th century alone. It was established unofficially around the late 1700s and dissolved after the Civil War.
An essential layer in the activity of the Underground Railroad was money and fundraising. In addition to the people who assisted the operation by serving as “conductors” and “stationmasters”, there were also valuable roles of “stakeholders” – those who contributed funds or made efforts to raise financial support to the newly freed. One of the popular activities were bake sales in Northern towns with the slogan “Buy for the sake of the slave”. For thousands of women, this was an opportunity to politicize domestic chores.

The activities of all those involved in the Underground Railroad were illegal and put the runaway slaves and their assistants in danger of imprisonment and fines.
In a famous quote, slave-holder George Washington, before becoming the first president of the US, publicly complained how one of his slaves escaped with the help of “society of Quakers, formed for such purposes.” And indeed, the Quakers were one of the first organized societies to call for the abolition of slavery, on the grounds that it was a violation of Christian principles. The African Methodist Episcopal Church was another important institution in the abolitionist movement.

The fascinating story of the Underground Railroad, as a central theme in the US Antislavery Movement, is often told with regard to a long list of male abolitionists, such as the legendary black leader Frederick Douglass. And although it is barely mentioned, many women had an essential role in the Underground Railroad actions.
In fact, the Abolitionist Movement was closely related to the early Feminist Movement. The rights of women and persons of color were both a concern for reformers of 19th-century US – challenging the superior status that white men enjoyed in society. Many famous women’s rights advocates developed their political awareness and set of activist skills from the Abolitionist Movement.
Women – both white and black – raised funds, run petition campaigns, wrote pamphlets, poems, and articles.

Jump to the list of tourist sites and landmarks that honor the women of The Underground Railroad and Abolition Movement.

Only two women get mentioned in the popular stories – Sojourner Truth and Harriet Tubman.

Sojourner Truth spent the first 28 years of her life in slavery, and another decade working as a domestic. Approaching her forties, she followed a calling to become a preacher and changed her name accordingly. She didn’t know to read nor write, and yet became one of the most well-known public speakers of the 19th century, advocating for equality between sexes and races. She also published an autobiography and was the first black woman to sue a white man in a United States court and win.

Harriet Tubman, “The Black Moses”, a former slave and an iconic leader who freed hundreds of enslaved people. After escaping slavery, she served as a conductor of the Underground Railroad. Among the hundreds of people who she led to freedom was her family. Though she did not start the Underground Railroad, Tubman is the name most associated with it. 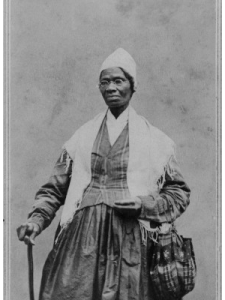 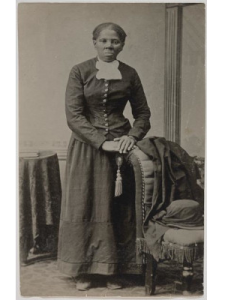 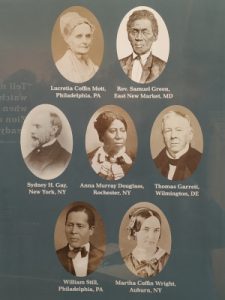 The stories of the contribution of more women to the Antislavery Movement started surfacing only in the late 20th century. Those women came from various backgrounds – comfortable middle-class families, working-class, laundresses and domestic, freeborn, former slaves, etc. Here is a partial list of heroins of the resistance:

Maria W. Stewart, for example, was a free black domestic who became the first American woman to address a public audience of women and men in 1832, speaking against slavery.

The Grimké sisters Sarah and Angelina acted for both Abolitionist and Feminist Movements. They toured and lectured in the early 19th century for the abolitionist cause. They were an attraction since women rarely spoke in public those days, and the fact that they came from a family of former slave owners made it even more of a sensation.

Sarah Mapps Douglass, who was born free to a distinguished black abolitionist family in Philadelphia, co-founded the Female Literary Association, a group of African-American women developing their writing and reading skills while deepening their identification with slave heritage. Her mother Grace Douglass was one of the founding members of the Philadelphia Female Anti-Slavery Society (PFAS) in 1833.

Elizabeth Margaret Chandler came from a white Quaker family. As a poet, she focused on abolition as her main theme, since publishing her first poem at the age of 18 in 1826, titled “The Slave Ship”.

Lucretia Mott is one of the more celebrated advocates of abolition and women’s rights. Among many of her contributions, she advocated boycotting the products of slave labor.

Elizabeth Freeman, who escaped slavery, initiated the court case that in 1781 set a precedent for the abolition of slavery in Massachusetts.

Lydia Maria Child was the author of the first book by a white person on the issue of slavery.

Sarah Parker Remond was a lecturer and agent of the American Anti-Slavery Society. She delivered her first speech against slavery when she was only 16 years old.

Frances Harper, born to free black parents, was a poet and lectured advocating for abolition.

Ellen Craft became famous when escaping from slavery in 1848 she traveled openly by train, using her light complexion to disguise as a white male.

Phillis Wheatley published poetry in 1773, contesting the social construct of the inferiority of women and blacks compared to white men.

Harriet Beecher Stowe also used literature for the cause. Her most influential offering was the novel, “Uncle Tom’s Cabin”. 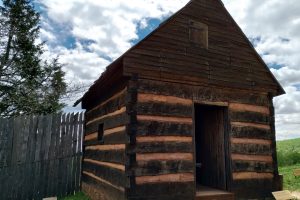 Slave residence in Monticello Plantation, owned by the third US President Thomas Jefferson. 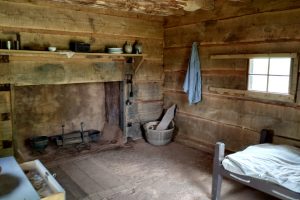 Interior look of a slave residence in Monticello Plantation, owned by the third US President Thomas Jefferson.

Many, if not all, of those women and their fellow female abolition activists, faced gender-related challenges when advocating for freedom for people of color. Some were mocked, others prevented access, and losing contracts and jobs.
Ironically, the gender-biased responses sparked the reform fire. One of the most notable examples of this “blessing in disguise” is the fact that Lucretia Mott and Elizabeth Cady Stanton initiated the iconic Seneca Falls Women’s Rights Convention after they were denied the right to speak at an Antislavery Convention in 1840 – based on their gender.

The rising point of women’s involvement in the abolitionist movement was in the 1820s and 1830s. By the mid-19th century, black and white women served as antislavery lecturers, editors, fundraisers, hid runaway slaves in their homes organized meetings in various spaces. Through the Abolition Movement, women gained experience as activists, leaders, organizers, writers, and lecturers for political purposes.
The Abolitionist Movement served as a step towards empowerment of women, and in return, the empowered women worked towards the freedom of the enslaved. Abolition was one of the first major campaigns to see women expressing themselves in the public sphere. At the time, it was widely considered that the “proper” place for women was in the domestic sphere.

Just like the history books, that are dominated almost entirely by male characters, with little to no mentioning of women, so is the map of tourist sites for those interested in exploring further the history of resistance to slavery in the US. Most of the sites are homes of the men who served as “stationmasters” of The Underground Railroad.

Here are a few exceptions, landmarks honoring the women of The Underground Railroad and Abolition Movement: 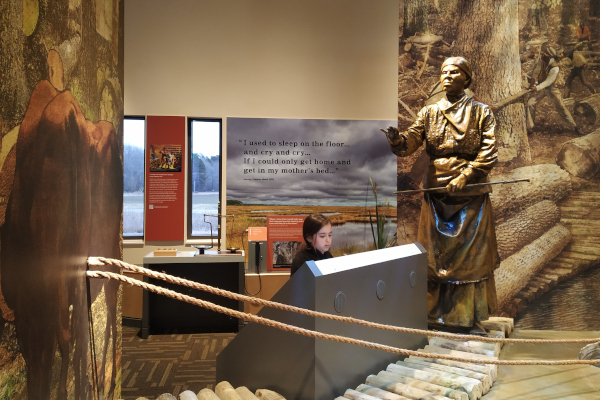 Follow Their Legacy: Landmarks to Visit, Tourist Centers, and Literature about The Underground Railroad Stories

* Read More About The Underground Railroad *