While most Western cultures antagonize the figure of a “witch” – hunting, executing, and bad-naming women who exercise spiritual superiority, Louisiana does the opposite. The state and its spiritual and cultural capital New Orleans embrace the power of its Voodoo Queens both in history and present. 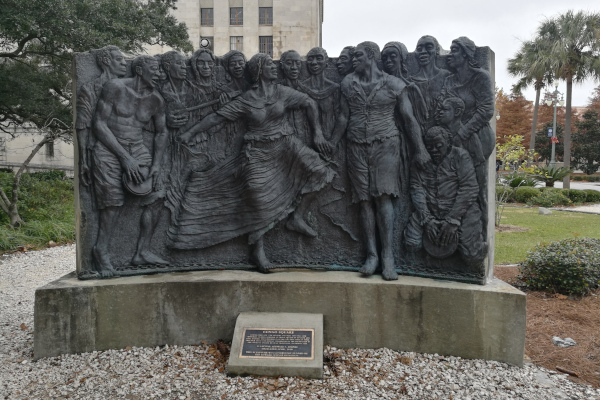 A statue depicts a gathering of slaved people dancing on their free day, Sunday. Located in Congo Square, NOLA.

The Rise of NOLA Voodoo Queens

Many explanations are suggested to explain how did New Orleans get to love its witches more than other places in the US. What made the city a compelling setting for the flourishing of voodoo culture and its female leaders?

Voodoo is dubbed as “the black sister of the Catholic church”. It was born with the arrival of enslaved West Africans in Louisiana in the early 18th century. Their religious practices were gradually merged with the Catholic religion. Voodoo Queens and Kings took on the role of spiritual and political leadership.

As a French and Spanish colony, Louisiana had a reputation of “generous” slaveholders – allowing more freedom of faith to the enslaved people.
Unlike the British colonies, in New Orleans, enslaved people were given Sundays off. Weekly gatherings became a Sunday tradition in Congo Square, located next to Louis Armstrong Park, playing music, dancing, and singing.

Some researchers point out to the city’s heritage as a cultural melting pot of European, Native, and West African cultures; others add the religious mixture of Catholic, Protestant, and African Faiths.
Some explanations point out to the Caribbean spiritual influences Vodou brought by migrants arriving from Haiti (formerly known as Saint Domingue) during the island’s revolution at the end of the 18th century.

There is also the story of Ursuline nuns who came from France to Louisiana in the 18th century on a mission to promote Christianity through the education of young women. The “side effect” of this missionary work was high rates of literacy among women – an empowering feature in the local gender dynamics.

Another question often asked is regarding the fact that women dominate local voodoo history.
Here too are several explanations to the rise of female leadership, comprised of sociopolitical, economic, and demographic factors.
Some attribute it to the high numbers of mixed-race relationships between women of color and white men – elevating the former to higher social status.

Central Women: The Legend, The Killer, The Novelist, and The Anthropologist 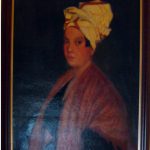 The woman most associated with New Orleans and Voodoo is Marie Laveau.
The undisputed Queen of Voodoo Queens was popular with people of all races, who attended her ceremonies and asked for her advice in personal consultations.
In the black community, in particular, her practice and position were considered politically empowering.
She enjoyed an exceptional position of respect and power, rare for a woman of color in the 19th century Louisiana. Long after her death, a robust local tradition has developed around her, and she is mentioned in many of the guided tours which will pass by one of her homes in the French Quarter or pay a visit to her grave, located at St. Louis Cemetery No. 1.

The female spirit of New Orleans Voodoo is expressed not only in Voodoo Queens, but also other professionals attracted to the culture. 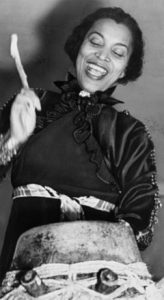 One to be captured by the New Orleans magic is Zora Neale Hurston, an influential early 20th-century author and anthropologist. In the 1920s, she came for a research-stay in Algiers neighborhood, then the heart of the local black community. She wrote to a fellow writer, “I have landed in the kingdom of Marie Laveau and expect to wear her crown someday”.

The material which she collected there, and in other journeys around the country, has inspired her book “Mules and Men

” (1935). The book is considered a groundbreaking masterpiece for the African-American folklore, documenting traditions as an anthropological science.
She told of her Louisiana findings also in the article “Hoodoo in America” (1931).

Neale Hurston made the professional assignment into a personal exploration, opening the hidden stories of voodoo to the world. She was motivated by the belief that “the proper voodoo book has never been done, and it is waiting for me to write it”. See more of the books written by Zora Neale Hurston about African-American culture here

, a best-selling queen of literature. Rice has published more than 30 novels, sold over 100 million books, and was popularized in films, plays, and TV series.
The novels that best capture the spirit of the city are – Interview with the Vampire

, The Feast of All Saints

Another local female worth mentioning in concern with the NOLA Voodoo culture is Madame Marie Delphine LaLaurie, one of the most infamous serial killers in the US. Locally nicknamed as The Savage Mistress, the elite Creole socialite shocked the world when it was found that she tortured and murdered slaves in her household.

Her former home, The LaLaurie Mansion, is a three-story building on 1140 Royal Street in the French Quarter. It is still rumored to be haunted by cruelty.
Through the years, it was used as a music conservatory, a school for girls, apartments, and businesses.
Currently privately owned, it serves as a landmark and an attraction for the local ghosts tourists.

Follow The Voodoo: Spells and Ghosts as Tourist Attractions

Among the many service providers, stand out two female initiatives: Tours by Judy, which is operated by a former history teacher; and The Voodoo Bone Lady Haunted Tours which also offers an interactive blessing right with a local medium.

Here is a list of other interesting tours with good reviews: 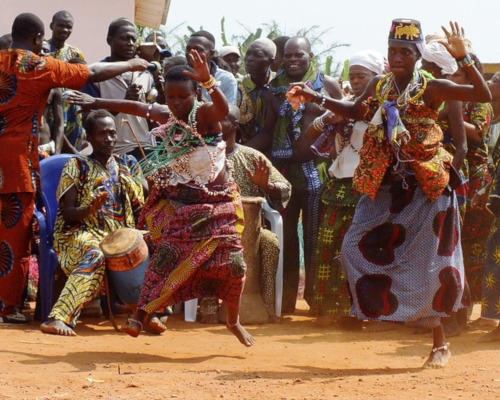 The most important festival in the spirit of New Orleans magic is the annual Voodoo Music + Arts Experience.
Since it started, a crowd of more than a million people and dozens of popular music acts made it second only to the New Orleans Jazz and Heritage Festival in attendance figures.

Another relevant happening is French Quarter Festival which will be celebrating 36 years of festivities in April 2020. It offers more than 20 stages throughout the French Quarter, focusing on local music in its full range of diversity.

Check out WWP’s New Orleans full calendar of events or plan your visit based on the annual events list.

Visitors are tempted to try the custom to make marks on her grave and ask for her help with a personal wish. In addition to the (now forbidden) marks, her tomb is decorated with candles and pennies.

Marie Laveau’s grave is considered to be the second-most visited in the US, after Elvis Presley’s.

The New Orleans Historic Voodoo Museum
The museum presents the mysteries, legends, and traditions of voodoo, mixed into the city’s history.
Located in the heart of the French Quarter between Bourbon and Royal Streets, it also offers walking tours. 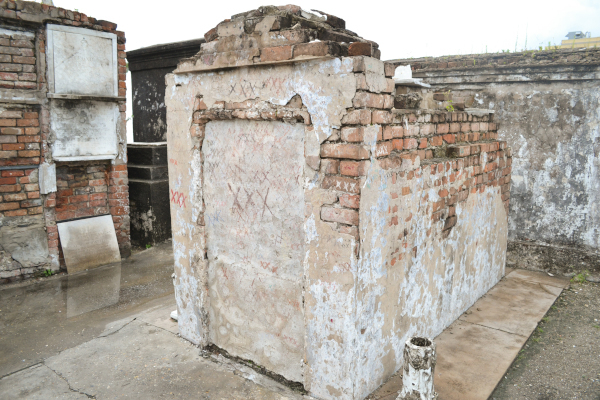 Get into the spirit and wear a proud witch T-shirt: