When walking around the city of San Francisco, women’s legacy is not present anywhere, although women had and still contribute tremendously to the city and its citizens.

We gathered below a list of places you might encounter when you stroll in San Francisco; each has a story of exceptional women behind it, women who shaped the city. From nuns who are professors, to a sex education pioneer, via a historic lesbian club, and a few ground-breaking artists.
These sites carry a glimpse of San Francisco’s HerStory.

This house was founded in 1874 by Woman’s Occidental Board of Foreign Missions. Its fame came some years later, with the rise of the local icon of justice – Donaldina Cameron.

New Zealand-born Cameron is famous as a missionary abolitionist who contributed to fighting girls trade in San Francisco’s Chinatown.
She arrived at the house in her twenties as a sewing teacher and ended up becoming its superintendent for 34 years.

Cameron became a living legend, credited with helping more than 2,000 Asian women who were smuggled into the US for domestic slavery and prostitution.
She was motivated by the agenda of converting the rescued girls – who were housed and educated here – into Christianity.

In 1906, the house was demolished in the great San Francisco earthquake and fire.
The house which stands today has been rebuilt in 1908.

In 1942, when Cameron was in her seventies, the mission home was renamed in her honor as “Cameron House”. Today it acts as a community center for Chinese-Americans.

Among the contemporary activities at the house is “Girls On Fire” curated by local young girls as a safe space.
Once a month, they are hosting a Friday Night Club – serving a home-cooked dinner and empowering conversations with a religious spice.

This community and education center is led by women for women since 1979, with a mission to promote social justice and gender equality by providing the tools women need to achieve equality in society.

The building is a public art landmark. It is wrapped with a beautiful painting, titled “MaestraPeace”.
The five-story mural was created in 1994 by a team of seven local female muralists: Juana Alicia, Miranda Bergman, Edythe Boone, Susan Kelk Cervantes, Meera Desai, Yvonne Littleton, and Irene Perez. Calligrapher Olivia Quevedo has contributed the script throughout the piece.

Over one hundred women volunteers assisted in the creation of the painting.
The mural aims to serve as a “standing ovation to women’s liberation”. It features a wide range of inspiring women figures.

For deeper engagement inside the building, check out their events here for a range of activities, from yoga classes to free financial coaching. 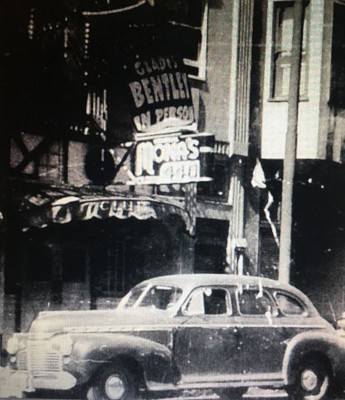 This spot is considered a legendary landmark in the local gay culture. Here in the 1940s and 1950s Mona Sargeant operated a bar “where girls will be boys.”
It is competing for the title of US first lesbian club.

It drew patrons from the lesbian community, and historically contributed to the LGBT culture in San Francisco.
Female waitresses and entertainers in the club dressed in tuxedos.
The famous singer, pianist, and openly lesbian entertainer Gladys Bentley performed here.

After about 25 years Mona’s was closed and replaced since by other bars.
Today there is The Cosmo Bar and Lounge there.

This fine art museum was a gift to the city by the famous patron of the arts Alma de Bretteville Spreckels.
It was opened in 1924 as a memorial to the Californian soldiers killed in World War I.

The French neoclassical building houses a collection of international art that was started with diplomatic efforts by its founder.

In addition to the exhibitions in the museum, the building provides its visitors with wonderful view of the Golden Gate Bridge.
But digging in the online archives, you will find that the life of Alma de Bretteville Spreckels is no less interesting than both the view and the collection.

SFWA Gallery is operating with the mission of supporting local women in the arts. Their work includes mentoring programs, exhibitions and events.

With time the spontaneous initiative became institutionalized as an official arts organization.
The organization moved through several locations, and since 2015 it is based on Irving street.

t’s worth checking their website for current exhibitions, events, workshops and lectures.

The University of San Francisco’s Lone Mountain campus is famous for its architecture and views, but an extra point of interest on site is the fact that it was the city’s first college for women.

Before the Religious of the Sacred Heart bought the land, it was used as a grave yard.
In the 1930s, when the graves were relocated, San Francisco College for Women was established.Hundreds of women students studied in the college, and some lived in the dorms on campus.

After struggling with financial troubles, the college was sold to University of San Francisco in 1978. USF were so impressed by the views, they decided to place their admissions office there.

Today the campus provides a lovely visit for lovers of classic architecture, with its three flights of stairs modelled after Rome’s Spanish Steps rising from Turk Street stairs towards an impressive building.

Once up the stairs, it’s worth visiting Del Santo Reading Room for its interior design of sculpted pillars and Gothic chandeliers. There is also a Café.

Back in 1977 sex therapist Joani Blank had a pioneering idea: to open a well-lit store-front sex shop. Fast forward to today, Good Vibrations can be found in nine locations and online.

Good Vibrations is considered to be the first sex shop for women in San Francisco, and the second in the country after Dell Williams’ 1974 Eve’s Garden in New York City.

The Mission shop is an institution as it continues the original first shop, which was located at 22nd and Dolores streets.

Good Vibrations offers both toys and books, focusing on sex education. Its employees are trained by in-house sexologist and educator.