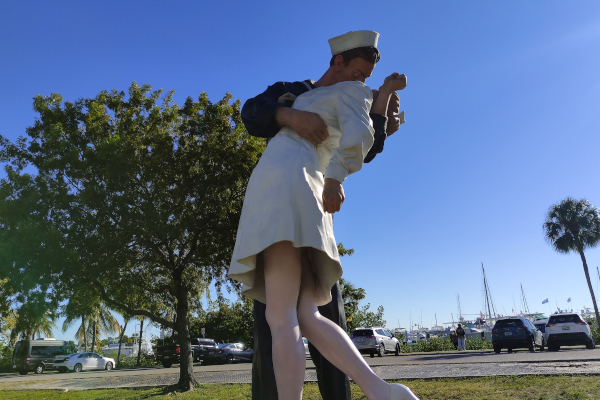 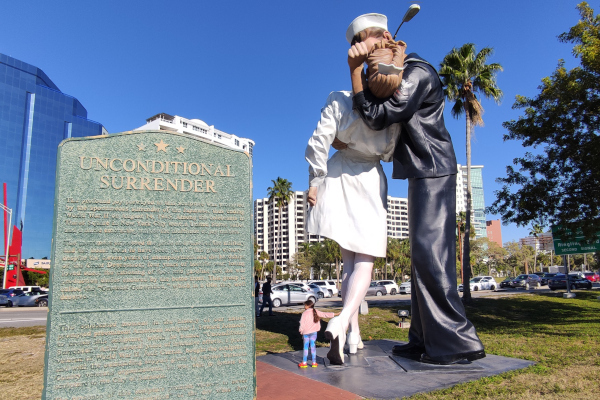 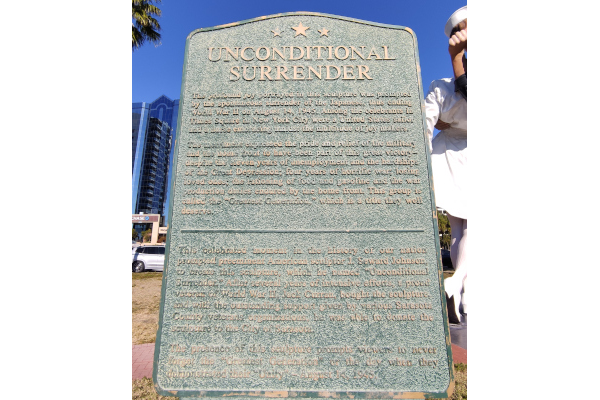 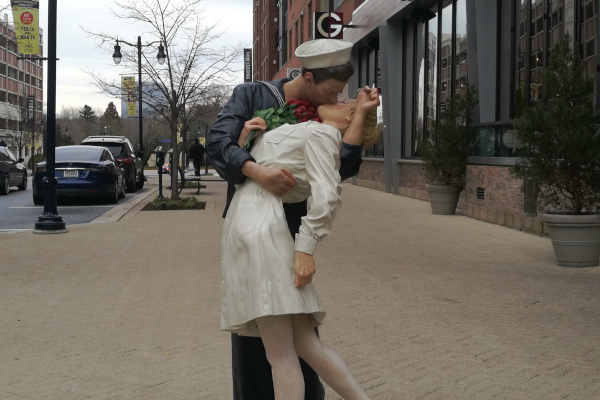 “Unconditional Surrender,” AKA “Embracing Peace,” is a series of 25-foot sculptures depicting a US Navy sailor kissing a nurse in what is appearing a romantic moment. The sculptures, made by John Seward Johnson II, are based on photographs taken in Times Square, NYC, on August 14, 1945, the day of the US victory over Japan (“V-J Day”) and became a symbol of a moment of relief, when WWII has ended.

The first sculpture, made out of Styrofoam, was exhibited in 2005 in Sarasota, Florida, and was later traveled to other cities. Later on, more replicas were made from various materials, such as bronze and aluminum. All were created from the first precursor, which was built using a computer.

Throughout the years, the sculpture has been a topic of controversy for numerous reasons, such as copyright, authenticity issues, and complaints that it is “kitsch” instead of art. And the most troublesome of all was that the sculpture is commemorating sexual assault and encourages rape culture.

The reason for this allegation is the real story behind the original picture. It was only discovered in 2019, a day after the sailor in the original photographs died. The people in the photographs were strangers, and the kiss was not a consensual act. The sailor, who was probably drunk, grabbed the woman, a dental assistant named Greta Zimmer Friedman, and kissed her unwillingly. As the picture and the sculptures depict, her fists clenched while his arms lock her, pulling her towards him. So, the photograph is actually capturing a moment of molestation.


Despite the background of the picture that inspired it, the sculpture has been displayed in various cities in the US and abroad, including Sarasota, Florida, Pearl Harbor, Hawaii, Hamilton, New Jersey, Caen, France, and Civitavecchia, Italy. Not everyone is pleased with its presence. In 2014, when the sculpture was installed in Caen, France, a group of French feminists, called Osez Le Feminisme, petitioned to remove the statue and sent it back to the US. The sculpture stayed on display, but a plaque was added under it, providing information on the depicted scene. In 2019, when the real story was discovered, the Sarasota sculpture has been tagged with a #MeToo on the women’s left leg.