Home > Chicago, IL > Chicago - Things To Do > Chicago - Stroll The City > Nature and Parks in Chicago

One of the biggest pride of Chicago is its vast green open spaces: over 580 public parks (and still growing), 29 beaches in 26 miles of shoreline, a River-walk and 303 miles of bike lanes, all of this fit well with Chicago’s dedication to sports.

The largest park of Chicago, located north to the Loop and named after US President Abraham Lincoln. It is one of the most visited public parks in the US with over 20 million visitors a year and for many reasons.

The park boarders with Lake Michigan and has several public beaches, harbors with boating facilities and a theater. There are recreational facilities for almost all sports types, from basketball to skate park and crickets.

In addition to all the beautiful open spaces in the park that gives a feeling of nature in the city, there are gardens, the Lincoln Park Zoo (free), Lily Pond and animal sanctuaries.

The park is also home to the Chicago History Museum, Peggy Notebaert Nature Museum (named after her) and public arts of many sculptures and statues, honoring ONLY MEN. There is one statue commemorating a woman, the Fountain Girl, also known as Frances Willard Fountain. 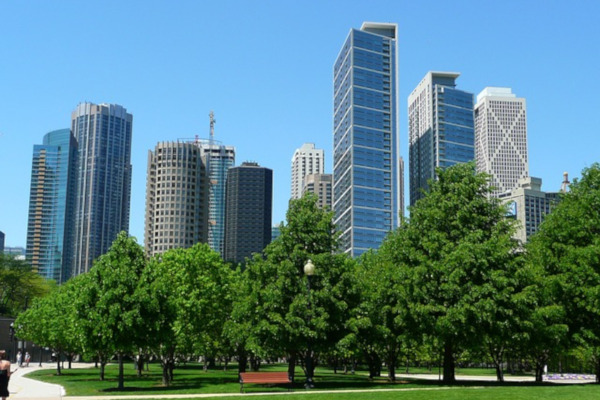 Located in the Loop area, this large and beautiful park is one of the must-visited sites when visiting Chicago.
The park offers lots of different activates – recreational sports facilities, public art works, the magnificent Buckingham Fountain, landscaped gardens and more.

The park was built during the early years of the city and as an open public space has hosted many gatherings, civic protests and celebrations.
Among its many annual events is the largest festival of Chicago, Taste of Chicago, five days of food and music festival occurring every July.

Its north part was renovated and is named the Millennium Park, home to the famous art sculptures- the Cloud Gate and the Crown Fountain. 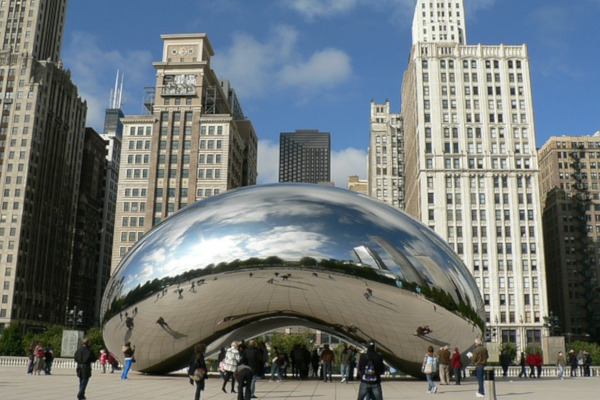 Next to the Millennium Park located Maggie Daley Park, named after the beloved and devoted First Lady of Chicago, Maggie Daley.
This park has recreational facilities – summer and winter skating rink, climbing walls, playground and more.

Out of 580 of parks, 50 are named after women who had a strong connection and contribution to the city.
Some of the names are known across the nation, while others are known only to the locals.

Naming parks to honor women started to receive focus at the beginning of the 21st century and in 2004 several parks were renamed to honor women who contributed to the city. Hopefully, one day the numbers will even and more and more cities in US will adopt this honoring policy.

We are listing here some of the parks which are named after a woman.
The parks are scattered around Chicago neighborhoods.

Most of the parks have playground and recreational facilities and open 6 AM till 9 or 11 PM. Some of the parks’ located few miles or blocks away from the original home of the women they are named after.

Opened in 2000 to honor the contribution of the women of Chicago to the city.
The “Helping Hands” Memorial honoring Jane Addams is located on the landscaped grounds.

In the park there is the field house which has café, indoor playground, meeting rooms and fitness studio.
Open daily 6 AM – 9 PM

Named after Julia Foster Porter (1846–1936) who in 1882 founded the first children’s hospital in Chicago after her 13 years old son died.

Renamed in 2004 to honor the talented jazz musician, Lillian Hardin Armstrong, who had a huge contribution to jazz music in general and to Chicago’s music scene in particular.

This fun park is named after the labor and women rights activist Lucy Ella Gonzales Parsons (1853- 1942), located a mile away from her last home in Chicago. Among her vast activist work was helping to organize in 1878 the Working Women’s Union No. 1 (WWU), then the only women workers unions in Chicago.
She was considered an anarchist but was supported by Chicago leaders as Jane Addams.

A moral of Jessie ‘Ma’ Houston is decorating the park named after her since 1991. Rev. Jessie “Ma” Houston (1899-1980) was a civil rights activist and the first woman minister supported Death Row prisoners in Illinois.

Located four blocks away from one of her homes in Chicago is a park honoring Mahalia Jackson (1911 – 1972), a worldwide gospel singer and an activist who rose to fame and got famous during the time she lived in Chicago.

The park was opened in 2004 and was named to honor Chi Che Wang (1894–1979), an important scientist and teacher, the founder of the Chicago Chinese Women’s Club and a contributor to the city in many civic efforts.

Renamed in 2004 to honor Gwendolyn Brooks (1917–2000), a poet, an educator and the first African-American to win the Pulitzer Prize (1950).
She lived most of her live in Chicago and contributed to it.

In the middle of the park stands her statue, one of the few female statues in the city.

The park was renamed in 2012 to honor one of the greatest poets of Latin America, the Puerto Rican born, feminist and activist, Julia de Burgos (1914-1953).

Her poems known as “combination of the intimate, the land and the social struggle of the oppressed”.

A small park located less than a mile from Chinatown is honoring Margaret Hie Ding Lin (1888–1973), one of Chicago’s first Chinese physicians who provided support and medical service to the residents of Chinatown.

One of the few parks which was built with the intention to honor Margaret Donahue (1892–1978), one of the first women executives in major league baseball.

Donahue started to work for the Chicago Cubs as a secretary in 1919.
Over the years she climbed up till she became the vice president in 1950, making many “firsts” as a woman in a dominated man’s field.

She is responsible for many innovations happened in professional baseball, such as season tickets, providing off-site ticket locations, and selling reduced priced tickets for kids.
The request and funds for the park came from the Chicago Cubs and it was opened in 2014.

Renamed in 2004 to honoring Lorraine Hansberry (1930–1965), an African-American playwright and the author of the famous play, A Raisin in the Sun, which won the best play of the year award by New York Drama Critics’ Circle.

Hansberry was born and raised in Chicago and the park is located half a mile from her childhood home.

The park is named after Mamie Till-Mobley, an educator, an activist, and the mother of Emmett Till who was brutally murdered on August 28th, 1955, when he was 14 years old, after being accused of flirting with a white woman.

After her son’s murder, Till-Mobley became an educator and an activist in the Civil Rights Movement.

The park was renamed in 2015, 2 years after the cruel murder of the high school student Hadiya Pendleton.
Pendleton, a talented student and a drummer, was a victim to gun shots by gang members.

Additional parks named after women are: