The freedom and the options that are so obvious to us in the present were not the reality for our female ancestors, and in the middle of the 19th century, they have started a journey to gain women the right to vote and for equal rights.

Actions of the suffragist movement happened in many places around the world; one of them was in the United States. Washington, DC, as the capital of the world’s strongest nation, was naturally a prime location where many of the national movement’s acts occurred.

Suffragists fought and sacrificed their lives to change the inequality, for us and future generations.
At the beginning of their battle for equality, the suffragists focused mainly in regular gatherings, acting mostly behind closed doors, trying to convince the elected to correct the injustice. When that did not change things, the women decided to go out to the streets, which eventually helped with the success of the suffragists’ struggle and their stories. Click here to read more.

The following itinerary is a self-guided tour to follow key locations of the movement’s path until the success of the struggle with the ratification of the 19th amendment to the United States Constitution, giving women the right to vote.

Start your day in any of the locations marked on this map and choose your order per your desire, interest and time. Admission is free to all, and all indoor stops have bathrooms…

Recommended time: Any season when the weather is welcoming a walk outside, just be prepared with an umbrella since even in the summer there might be rainy days.

Duration: The tour’s total distance is 2.5 miles. The walk takes about an hour and a half, but if you plan to visit inside all the sites, you should add three to four more hours.

Arriving at the starting point: The closest Metro station for arriving at our recommended first location is Union Station, a beautiful train station with lots of food and beverages options .

Guided tour options: Several guided tours offer a shared walk while learning about the history of the movement and its leaders.
We highly recommend to combine it in the day trip to learn deeper. The duration of the guided tours is usually two hours, and they cover some of the places in the following suggested itinerary. View some of the options here.

The home of the National Woman’s Party is the place where women gathered to discuss their action plan and strategies of their fight for equal rights. Since 2016, it is a monument and museum called Belmont-Paul Women’s Equality National Monument.
The museum tells the story of the suffragist movement and the National Woman’s Party, showcasing exhibitions about their leaders, actions, and more. Read more here. 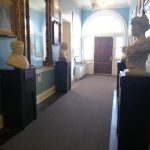 From the museum, walk to the US Capitol, the home of the Congress, an important and impressive building, a symbol for lots of moments in American history. In the Capitol rotunda, next to the founding fathers and key leaders’ statues, since May 1997, stands the group portrait monument to the pioneers of the Woman Suffrage Movement – Elizabeth Cady Stanton, Susan B. Anthony, and Lucretia Mott. Click here to read more about the suffragists. 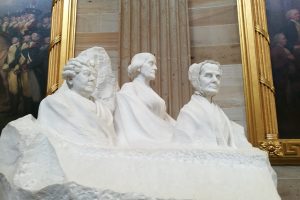 To see the statue, you will need to join a guided tour in the Capitol (it’s free). The tour takes 1.5-2 hours, and you will also learn about the building and the history of the American people.
During the high season, it is recommended to reserve a spot for a tour in advance – click here for reservations and more info. 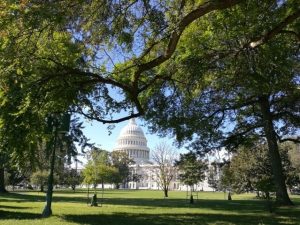 Leave the Capitol and walk along Pennsylvania Avenue. This large boulevard hosted the largest 1913 Suffragist Parade in WDC, planned by Alice Paul for the National American Woman Suffrage Association (NAWSA). Here thousands of women marched quietly demanding their right to vote, while thousands of men tried to block their way.
The women were led by Inez Milholland, while she was wearing white and sitting on a white horse, marching towards the US Treasury.

Not directly related to the parade, but still an important stop at 633 Pennsylvania Ave., is the National Council of Negro Women, founded in 1935 by Mary McLeod Bethune to empower African-American women and still active until today.
If you are interested to learn more, The Mary McLeod Bethune Council House is a museum, showcasing the council’s history and the life of Mary McLeod Bethune. 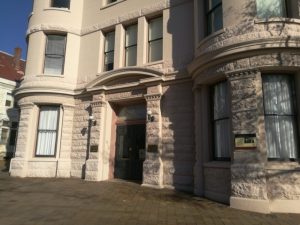 Across the road is the National Archives Museum which hosts lots of documentation, pictures, posters and more about the suffragist movement.
One of the museum’s events (till 2021) is the exhibition “Rightfully Hers: American Women and the Vote”, which presents the long women struggle for the right to vote, even years after the ratification of the 19th amendment.

Back to 1913 and the suffragist parade, continue to walk along Pennsylvania avenue till arriving at the US Department of the Treasury.
Here was the last stop of the extraordinary parade which ended with a happening and performances, an amazing public relations act that brought a lot of positive publicity to the women’s struggle. 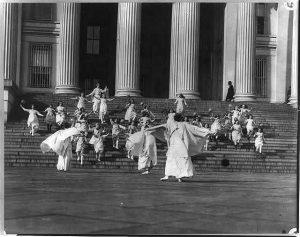 1913, suffragists and girls in front of the US Treasury Department. Photo credit – Library of Congress.

This next stop was the next location where the struggle continued, the White House.
For several more years, in daily, quiet demonstrations the women continue protesting, rain or shine, holding signs in front of the White House. Despite their non-violent actions, some of them got arrested and were force-fed. At last, in 1920 the 19th amendment ratified to the constitution, allowing women the right to vote. If you wish to visit inside the white house, submit a request with your Member of Congress, at least three weeks before the visit. Click here for more information.

Winter 1917, suffragists are picketing in front of the White House. Photo credit – Library of Congress.

If you still have energy left, we highly recommend entering the Renwick Gallery close by, a branch of the Smithsonian American Art Museum, with unique changing exhibitions. Jackie Kennedy campaigned for it to become the wonderful museum it is today.

The tour ends here. If you would like to walk back to Union station, it is a nice 40 minutes walk, through the mall or F street. If you decide to stay in the area, there are lots of restaurants and cafes all around. 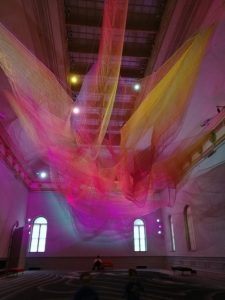